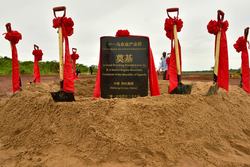 And the seal of approval couldn’t have come from any higher: President Yoweri Museveni and his deputy Edward Ssekandi travelled to rural Luweero to commission the China-Uganda Agricultural Industrial Park.

The minister said the project will also include agribusiness, value addition, use of renewable energy and agro-machinery. Bucyanayandi said negotiations between Ugandan officials, who included Ssekandi and the presidential advisor on security, Gen (rtd) Caleb Akandwanaho a.k.a Salim Saleh, began in 2012, after a group of investors from China’s Sichuan province visited the country.
“The overall goal of the project is to use Chinese technology... to promote investment in Uganda by attracting investors from Sichuan province,” he said.

Museveni said that while Uganda’s major urban areas are largely designed as trading towns, the project is taking to Luweero district the concept of “an agricultural park”. With palpable pride, Museveni said the park would ensure that “what was a forest is going to turn into a city for agricultural produce and factories”.

“This is an important instrument for transforming the community,” Museveni said, before urging locals to take advantage of the opportunity and not steal from the Chinese investors.

According to Luo Heng, the lead investor for Ke-Hong Group, the total investment that the Chinese company will inject into the project is $220 million (about Shs 726 billion).

“We will create 20,000 work opportunities, increase productivity of local farmers and improve their income,” he said.

Ssekandi, who is also the patron of the China-Africa Friendship Association-Uganda (CAFAU), described the project as a testament to the benefits of public-private partnerships. He said: “This project has proved that when the public and private sector work hand-in-hand, a lot can be achieved.”

The principal private secretary to the vice president, Vincent Musubire, said the project is also expected to benefit farmers from the neighbouring districts of Nakaseke and Nakasongola, through technology transfer to out-growers.

“We are going to train out-growers on the best practices of agriculture,” he said.

The Chinese ambassador to Uganda, Zhao Yali, said the project was the first agricultural industrial park to be financed privately by Chinese investors. He said the decision by the government to offer the land showed the importance that it attached to its cooperation with China.
The event, punctuated by entertainment-praises of President Museveni and the NRM, was also attended by area MP and minister without portfolio Abraham Byandala, among a host of officials. Byandala said the project would bring jobs, extension services, food security and agro-processing.

Despite the euphoria, some locals said giving such huge chunks of land to foreigners would curtail local production since the Chinese use mechanised farming methods. One man complained that some people were displaced from the land to make way for the investors, who, according to Byandala, have only leased the land.

However, the secretary general of CAFAU, Dr Alex Kakooza, whose organisation scouts for Chinese investors such as Ke-Hong, said Ugandans should look at the value the investors add to previously idle land.