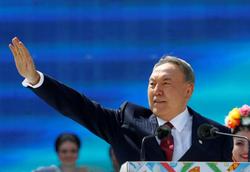 Kazakh leader evokes Ukraine as land protests spread
ALMATY (Reuters) - Kazakh President Nursultan Nazarbayev, facing a growing wave of protests against planned changes to land ownership, evoked the image of war-torn Ukraine on Sunday as he called for national unity.
Speaking at an event in Almaty to mark the annual May 1 Unity Day celebrations, Nazarbayev highlighted Ukraine, where street protests in 2013-2014 toppled the government of Viktor Yanukovich, as an example of what could happen in the absence of unity.
"Ukraine, the second-biggest ex-Soviet state, today has an economy which is half the size of Kazakhstan's," the president said. "Because there is no unity, no sense of purpose, no tasks are being solved, (people) are busy with other things: fighting, killing, brawling."
Though relatively small, the rallies are a challenge to Nazarbayev, 75, who has run the oil-rich Central Asian nation since 1989 with little tolerance for dissent since 1989. The collapse in global oil prices has hurt the economy and the government's fiscal position, prompting Fitch Ratings to cut the country's long-term sovereign debt ratings on April 29.
The protests which are entering their second week, were sparked by fears that land reforms will allow foreigners to take over farmland, although some analysts say many Kazakhs have attended the demonstrations to express their general discontent.
A legal overhaul due to take effect on July 1 will allow the government to sell farmland to joint ventures, provided they are controlled by Kazakh residents, and lease it to foreigners for up to 25 years. Previously they were only allowed leases for up to 10 years.
Opponents of the new law, who staged their first protest in the city of Atyrau last Sunday, see the change as a threat to national security, especially after the government announced several agreements with neighboring China for agricultural projects.
Rallies have taken place in several cities during the week, despite warnings from Nazarbayev and the prosecutor general's office that the organizers would be punished.
On Sunday, political activists said dozens of people took to the streets of provincial capital Kyzylorda in southern Kazakhstan. One video posted online showed protesters scuffling with police in full riot gear at a square where official celebrations of the Unity Day holiday were taking place.
In another video police were seen marching in formation at a group of protesters and then chasing them down the street as they tried to scatter.
A spokesman for the local police said by telephone that several people had been charged with misdemeanors over the protest which was illegal because it had not been agreed in advance with the authorities.
In the town of Zhanaozen, the site of a deadly clash between striking oil workers and police in 2011, dozens of protesters took to the streets and sang the national anthem in the city's main square, according to videos posted on the Internet by activists. Zhanaozen police could not be reached for comment.
(Reporting by Olzhas Auyezov and Shamil Zhumatov; Editing by Nerys Avery)