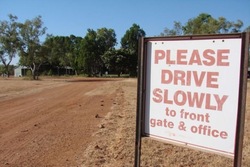 By Lucinda Jose
A Chinese property development company is set to become a major cattle producer in Western Australia.
The Australian operating arm of Shanghai CRED, known as Shanghai Zenith, has agreed to purchase eight properties in the Goldfields, Kimberley and Wheatbelt for around $20 million.
The properties total more than a million hectares of pastoral and freehold land and are currently supporting small numbers of cattle.
Shanghai Zenith is one of the partners to a consortium looking to purchase iconic S. Kidman and Co properties for more than $370 million.
Elders Pastoral specialist Greg Smith has been working on the West Australian deal.
He said most of the properties are currently destocked and would need significant investment.
"The properties in the Goldfields are mixed, they were sheep stations but the wild dogs have cleaned out all of the sheep so they have really been unproductive, except for Riverina in the past 10 years,"
Elders Real Estate expects Shanghai Zenith will spend $1million a year over five years to establish infrastructure needed to run significant numbers of cattle.
The deal is yet to receive Foreign Investment Review Board approval and consent from the Western Australian Minister for Lands Terry Redman, however Mr Smith is confident approval will be forthcoming.
"No one else has shown a willingness to invest in the infrastructure required to get them back into a productive state. They are not impinging on the current production they are actually adding to the state's productive ability as far as livestock goes," Mr Smith said.
Minister Redman said while he was yet to see the proposal there would need to be a good reason for Cabinet to knock it back.