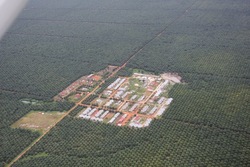 Jokowi bans new oil palm and mining concessions
By Fidelis E. Satriastanti
Reactions to Indonesian President Joko Widodo’s recently announced plan to ban new oil palm and mining permits were generally positive on Friday, with activists reminding him that the devil is in details.
“It is a step forward from the president that we no longer need to expand [oil palm plantations] but should be focusing on increasing productivity” in existing plantations, said Maryo Saputra, of the NGO Sawit Watch, which focuses on sustainable palm oil. “However, we will not just buy [his] words because they should be implemented with action.”
Indonesia, the world’s top palm oil producer, produced an estimated of 30.9 million tons of the commodity in 2015, according to the agriculture ministry. But rapid plantation expansion is eating away at the archipelago’s vast rainforests and contributing to the region’s annual fires and haze problem.
President Jokowi, as he is known, announced the oil palm and mining moratorium plan on Thursday on Karya Island near Jakarta, where he also released hundreds of newly hatched turtles as part of the launch of a new national movement on biodiversity conservation.
He framed the licensing freeze as a continuation of the 2011 forestry moratorium, which banned new permits to develop primary forests and peatlands.
“Current plantations are enough, as long as the seeds are proper, it is possible to increase productivity by two times,” he said.
The government said in its statement that oil palm plantations already cover 11.4 million hectares, but Sawit Watch’s Saputra claimed that there were already more than 15 million hectares last year, and that the figure could reach 20 million by 2020.
“It has been the goal [of Sawit Watch] to stop expansion. So there is no need for more permits and those already issued should be reviewed or postponed. [The moratorium] should be applied to all areas,” he said, adding that companies have the technology to increase productivity without further expansion.
Annisa Rahmawati, forest campaigner of Greenpeace Indonesia, said the moratorium would help bridge the gap between government departments responsible for implementing the forestry moratorium.
“These moratoriums are crucial because when you’re talking about forest conservation, peatland protection cannot stand alone,” she said. “It has to include other sectors.”
Implementation of the policy was most likely to encounter stumbling blocks at the local level, she added, especially because Indonesia’s “One Map” policy was not yet finalized.
“If it’s not finalized, then it can instead become loophole for violations,” she said. “It also affects law enforcement because if it’s not finalised then there’s no legal reference to pursuit liability from the culprit.”
Rawing Rambang, the government’s plantations chief in Central Kalimantan province, said his office would wait for an official letter or written instruction from Jakarta on the oil palm moratorium. He suggested that existing permits could maximized by raising productivity or setting up downstream industries.
Central Kalimantan was the largest palm oil producer in Indonesian Borneo last year, with an output of 3.5 million tons and 1.2 million hectares under cultivation, but the province was also a center of last year’s devastating fires and haze.
The moratorium was well-received by palm oil giant Golden Agri-Resources (GAR), which presides over more land than any palm oil company.
“It has been [GAR’s] view for some time that we need to focus [on] increased productivity [and] yield rather than land expansion,” GAR spokesperson Anita Neville said in a statement.
The Indonesian Palm Oil Association (GAPKI) would not comment specficially on the announcement, saying it was still building communication with the government to obtain more detailed information.
“What we can say is that oil palm industry is a strategic sector which had contributed $19 billion in 2015, far more than $12 billion from oil and gas sector,” GAPKI spokesperson Tofan Mahdi said.
“President Jokowi has stated that palm oil is a national strategic sector and must be maintained. We will keep monitoring on information related to the president’s statement.”