Statement of solidarity with the communities of Ndian Division, Southwest Region of Cameroon 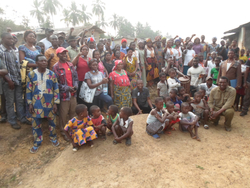 We are 40 participants who have united in Mundemba, Cameroon, for an international workshop on the tactics and strategies of oil palm companies, from 28 to 31 January 2016. We have gathered to share our experiences from Cameroon, West and Central Africa, Asia and South America, and to understand the realities of the local communities in Ndian Division, Southwest Region of Cameroon.

We share the concerns of local communities regarding the growing interest in community land for corporate oil palm plantations. The experiences shared during the workshop by the different participants—who came from several countries affected by oil palm plantations and from the home countries of companies involved in this expansion—attest to the dangers communities are facing. In Indonesia, communities have had millions of hectares of land fraudulently taken and destroyed by oil palm companies, and many of these companies are now grabbing lands for plantations in Africa. In many African countries, we see companies systematically failing to keep promises they have made to communities whose lands they have taken through corruption, bribery, lies, intimidation and other devious tactics.

From our field visits to Ndian Town, Fabe, Meangwe II and Ikondo-Kondo resettlement, we witnessed and heard about the tactics and strategies used by oil palm companies. The devastating impacts that plantations have had in other countries are more or less reflected in this part of Cameroon. We witnessed how companies in the area have failed to respect court rulings in favour of the communities or to abide by laws pertaining to the protection of the environment and the acquisition of lands. We are deeply troubled by the intimidation and criminalisation of community leaders and organisers opposed to projects, including the local organiser of this workshop, the Mundemba-based organisation SEFE. We have seen how companies are not providing the basic services and support they promised to communities, such as scholarships, employment, community farms, bridges and roads, royalties, housing, health care, water or utilities. And we have also seen how companies have used divide and conquer tactics to try to break the unity of communities. The companies are not bringing development, but are merely generating poverty, food insecurity, social conflict and environmental destruction.

We are moved by the peaceful efforts of communities and those working with them to protect and maintain control over the traditional use of their lands, which they have looked after for generations. Despite the challenges and difficulties faced by the communities in this area, we appreciate their efforts to defend their interests and we acknowledge their courage. We are inspired by the successes some of these communities have had in preventing companies from taking land in their areas.

Lastly, the participants gathered in Mundemba from various parts of the world for this workshop would like to thank the local government authorities for having made this event possible by guaranteeing the security of all the participants. And we commit to providing all possible support and solidarity to the communities of Ndian Division in their struggle to defend their lands in a peaceful and non-violent way.

Considering that the aspiration to human dignity is a common ideal for humankind, and that the United Nations Charter asserts this aspiration in its preamble and in the Universal Declaration of Human Rights;

Considering the key role women play in the global economy, a role also recognized by the Millennium Development Goals;

Considering the role that women play in the local economies of each country in the region;

Considering the pivotal role that women play in maintaining their families, which is at the heart of our societies;

Aware of the fact that women are always at the forefront of the struggle against poverty, through their many interventions, especially in the field of agriculture;

We, leaders of groups of women affected by the expansion of industrial monoculture plantations, particularly oil palm plantations;

We, national and international organizations involved in the struggle for the rights of women and local communities in Africa, Latin America and Asia, signatories of this declaration, met from 27 to 28 January 2016 in Mundemba, south-western Cameroon;

After having:
Having found that:
We reaffirm our commitment to invest in: WE RECOMMEND

To public authorities To donors and technical partners To local and international NGOs To women Mundemba, Cameroon, 28 January 2016