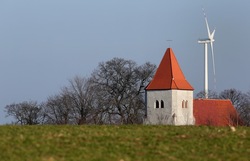 The Polish government, which is already at loggerheads with EU institutions over its constitutional reforms, could also be in trouble over a farmland bill which was passed in parliament on April 14, 2016.
EU Observer | 14 April 2016

Polish farmland bill may breach the EU law
By LUKASZ LIPINSKI
WARSAW, TODAY, 17:28
The Polish government, which is already at loggerheads with EU institutions over its constitutional reforms, could also be in trouble over a farmland bill which was passed in parliament on Thursday (14 April).
The new rules to regulate buying and selling of land because an exemption from European law granted when Poland joined the EU in 2004 ends on 1 May.
Under the temporary rule agreed to protect Poland's farmland and forests market, citizens of other EU states needed to obtain permission from the interior minister to make a purchase.
Warsaw argued that the rule was necessary because land in eastern EU states was much cheaper than in western Europe. Similar measures were taken by the other eastern EU states.
As a result, there were very few transactions involving foreigners. Last year they bought only 243 hectares of farmland and 159 hectares of forests in Poland.
It is easier, however, to take control of land through companies. According to the interior ministry, foreigners gained possession of 9,700 hectares that way. It is still not much, as the state itself sold a total of 75,000 hectares in 2015.
With the transition period coming to an end, the right-wing government wants to ensure that farmland stays in the Polish hands. However, according to EU law it cannot simply discriminate against the citizens of the other member states.
Stopping sales
The government instead has proposed that the state stops selling the land it owns for the next five years.
The new law also sets out very strict rules on who can buy and sell land that is in private hands. Farmers will only be able to sell to other farmers who own not more than 300 hectares of farmland and have been residents of the municipality in which they bought the land for at least five years. They have to run their farm in person, which must be certified by the local authority.
If a farmer wants to sell land to anyone who does not fit these criteria, they must get permission from the Agricultural Property Agency.
The agency will also be able to step in and purchase land itself in a procedure called pre-emption, where it would pay a “market price” that it would set itself.
There are a few exceptions from these rules, one of them allowing churches and local authorities to buy and sell farmland.
The bill was adopted by the Senate on Thursday after a first vote by the Sejm, the lower chamber, last Friday (8 April). It still needs to be signed by the president to become a law.
Adam Czerniak, chief economist of Warsaw based think-tank Polityka Insight, points out that most of the land in Poland is classed as agricultural and needs to be legally converted to build anything on it, so “the new law will make it more difficult for companies to buy land to build factories".
“The price of residential plots will go up considerably, and it will be impossible to buy agricultural land,” he adds.
Some investors will therefore put pressure on local authorities, he says, to speed up farmland conversion, which could lead to corruption.
Property developers will have to pay more for land parcels, which will translate into higher prices for flats.
The opposition PSL party has led demonstrations against the bill.
Against EU rules
The farmland bill comes amid a dispute over the government's reforms of the constitutional court, the law on public media and the civil service.
The opposition is accusing the government of suppressing the liberal democracy in Poland. The European Commission has launched a probe on the state of the rule of law in the country.
According to the Polish Ombudsman Adam Bodnar the new farmland rules could be unconstitutional because they drastically reduce the rights of the property owner.
He also believes that the pre-emption procedure could be classified as unlawful expropriation because the state can set its own prices for the land.
The new regulation could also breach EU law.
The Court of Justice of the European Union allows for restrictions on the buying and selling of land, but these must result from "the requirements of public interest", be proportional and must not discriminate against people and companies from other EU countries.
The new farmland law does not discriminate against other foreigners directly, but the far-reaching restrictions might not fulfil the requirements of "proportionality".
The European Commission has not yet begun investigating the Polish law. But it has already launched investigations into restrictions on the trade in agricultural land in some other member states: Bulgaria, Latvia, Lithuania, Slovakia and Hungary.
The provisions being scrutinised include requirement of residence in the territory, possession of specific education or a ban on purchase of agricultural land by companies.
If the commission eventually investigated and found that the Polish law violated EU regulations, it could ask Warsaw to amend it. If the Polish government did not comply, Brussels could take Poland to the Court of Justice of the EU.
Polish authorities are aware of the possible risks connected with the new regulation. The agriculture ministry is already said to be working on some amendments, but the details have not yet been made public.