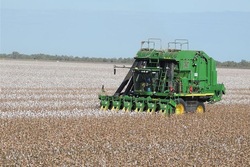 By Anna Vidot
Foreign investment in farms like the iconic Cubbie Station in southern Queensland has kept the issue high on the political agenda for the past three years. (Photo: Cassie Hough)
The chairman of Australia's Foreign Investment Review Board has likened his role to walking a barbed-wire tightrope, as he attempts to balance the interests of investors and the need for capital with community concern about foreign sales.
Brian Wilson leads the advisory group at the centre of one of Australia's hottest political debates, but is rarely heard from in the media.
Speaking to ABC Rural at the major Food Futures conference on northern Australian development in Darwin, Mr Wilson said Australia has made progress towards making its foreign investment regime more transparent.
He said more can be done, as long as it is "subject always to ensuring that from an investor perspective, and for a company seeking investment, that commercial in confidence information is not made available."
FIRB boss backs farm register, defends national interest test
The Federal Government has recently increased scrutiny of foreign investment in farmland and agribusiness, by lowering the price threshold that triggers an assessment by FIRB.
It's also created a national register of foreign-owned farmland, although that register has faced recent criticism for failing to meet community expectations of a 'click and see', map-style index of which company and which country owns specific farms.
Mr Wilson said it's not for him to make a judgement about the extent to which the information contained in the register is available to the public, but he believes it will deliver "much more" than simply reporting a broad national percentage for the amount of land owned by each foreign country.
He strongly supports the register itself, which he described as "a very good thing, [with] bipartisan support, [which] will get the facts out on the table, rather than the myths".
Many of the same critics who wanted a register of foreign owned farmland are also concerned about the 'national interest test' FIRB uses to assess foreign acquisitions, which they've described as subjective and subject to change.
Mr Wilson said Australia's 'national interest test' is rightly and deliberately undefined, and "has served Australia extremely well" since it was introduced in 1975.
Pointing to previous opposition to US investment in manufacturing in the 1970s, and Japanese investment in the 1980s, he said the test needs to be flexible.
"The national interest also changes, according to economic situations in Australia and around the world. It changes in accordance with geopolitics.
"If we think about how things which might once upon a time have been seen as difficult in national interest terms but no longer are because they reflect community concern, they reflect Australia's position in the world, they reflect the sort of investors and country of investment that is coming in, those things, because of those changes, may no longer be a national interest issue at all.
"So national interest is not something you can freeze and say it's never going to change. Of course it's going to change."
Little-heard FIRB
Despite its central role in the outcome of foreign investment applications, the FIRB rarely speaks publicly.
Mr Wilson said while FIRB doesn't constantly speak in the media, he gives a speech at conference-style events in Australia every couple of weeks, and he travels to other countries, including China, to discuss Australia's foreign investment regime too.
"I think we're doing much more than we used to to communicate," he said.
"We have a website that's increasingly populated with guidance notes, we give lots of forums with relevant stakeholders including law firms and so on who usually represent investors.
"But I would suggest to you that part of this is also what's interesting to the media and what's interesting to the public are stories of controversy, not things that are less so."
"To put it in context, we have about 800 business cases a year and those that become politically charged, or charged in the public arena, are probably only six or eight or 10. So that means 790 or so cases are going through [without controversy]."