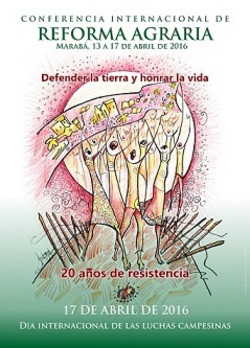 17 April : Day of Peasant's Struggle
La Via Campesina organizes the International Conference of Agrarian Reform in Brazil
(Harare, 6 April 2016) This year marks the 20th anniversary of the  Eldorado dos Carajás massacre. On April 17th, 1996, nineteen peasants – women and men members of the Landless Movement – were assassinated while they were taking part in a legitímate struggle to obtain land. Since that time, La Vía Campesina  has declared April 17th to be the International Day of Peasants’ Struggle. It is in this context of memory and resistance that La  Via Campesina, together with its members and allies such as the World March of Women, the World Forum of Fisher People, the Organisation of Indigenous Peoples, the International Planning Committee for Food Sovereignty (IPC), FIAN International, GRAIN, ETC Group, LRAN, and Friends of the Earth International, is organising this International Conference in order to renew and bring up to date the discussion of Agrarian Reform.
The Conference will take place in Pará, Brazil, from April 13th to April 17th.  Topics for the main discussion panels include: capitalism and agribusiness; the project for popular agrarian reform; and the challenges faced by the peasants’ and small-scale farmers’ and workers’ movements in developing a common plan of action. It is expected that the Conference will be attended by 200 women and men delegates from Africa, Asia, Europe, the Middle East, and the Americas. The delegates will also take part in a closing international ceremony of solidarity, mística (celebration of the ideals that inspire our movement), and justice, which will be held in very same place where the Eldorado dos Carajás massacre was perpetrated, on the same date and at the same time of day.
For La Via Campesina, the question of land is central to the struggle for Food Sovereignty. That is why La Via Campesina finds it important to have this occasion for collective reflection and planning, at a moment in time when peasants and small-scale farmers struggling to have, or to maintain, access to land are being subjected to landgrabbing, dispossession, hunger, and criminalisation.
From this perspective, the Agrarian Reform model that La Via Campesina is putting forward should not only ensure access to, and control over, land for those who work it. It should also ensure Food Sovereignty through the provision of healthy food produced by agroecological methods. In addition, it should guarantee decent living conditions and basic rights to health care, education, technology, and culture for all of the rural population. It is a social project that  not only concerns peasants and small-scale farmers, but that should rather be seen as an alternative solution to problems in the social structure, both in the countryside and in the society as a whole.In this light, it is crucial for a world-wide movement like La Via Campesina  to construct a shared platform in order to influence public policies, and, additionally, to strengthen unity and solidarity in the struggles in the territories.
Press contacts:
Viviana Rojas Flores  (55) 6199299536
Spokespeople:
Marina Dos Santos, Moviment  landless People, MST, Brazil. Spanish, Portuguese.
Federico Pacheco, European Coordination Vía Campesina, French.