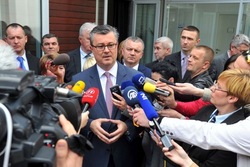 
Investor from Middle East interested in Slavonian land
By Vedran Pavlic
Prime Minister Tihomir Oreškovic has announced that an investor from the Middle East is interested in a 10,000 hectare plot of agricultural land in Slavonia. He added that the authorities should see whether to ensure at least 5,000 hectares of farmland in the Vukovar-Srijem County for the needs of this investor, reports agrobiz.hr on April 1, 2016.
"It is an investor from the Middle East. Today, I took the opportunity to put the proposal on the table and see if we can come up with the model that would merge the agricultural land together. This can be 5,000 hectares, we don’t have to provide the entire 10,000 hectares. Maybe the EU could help us through clusters, while the government could help with subsidies, so that when the investor comes we can say that we are ready", Orešković explained after a meeting with entrepreneurs and representatives of the local government and administration from Vukovar-Srijem area.
The Prime Minister said there is 800,000 hectares of farmland in Croatia that is currently not being used at all, and added that the models should be identified how to put this land to use. "We talked about helping the economy. We mentioned a fund of 500 million euros. Such a fund would allow us to help investors get the loans and the seed capital that they need", Orešković said.
The head of the agriculture department at the Vukovar-Srijem County Andrija Matić told the reporters that there is no 10,000 hectares of farmland available in the county. According to him, the county has 149,000 hectares of agricultural land, and all of it is being cultivated.
Prime Minister Orešković’s meeting with the entrepreneurs and representatives of the regional and local authorities has been the central event of his two-day stay in Vukovar-Srijem County. He will also visit several family farms in order to hear directly from the farmers about the problems they encounter.