Why Saudi Arabia bought 14,000 acres of US farm land 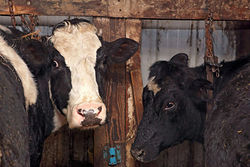 (AP Photo/Grand Forks Herald, John Brose)
Christian Science Monitor | 28 March 2016
Why Saudi Arabia bought 14,000 acres of US farm land
By Elliot Spagat and Aya Batrawy, Associated Press March 28, 2016
San Diego — Saudi Arabia's largest dairy company will soon be unable to farm alfalfa in its own parched country to feed its 170,000 cows. So it's turning to an unlikely place to grow the water-chugging crop — the drought-stricken American Southwest.
Almarai Co. bought land in January that roughly doubled its holdings in California's Palo Verde Valley, an area that enjoys first dibs on water from the Colorado River. The company also acquired a large tract near Vicksburg, Arizona, becoming a powerful economic force in a region that has fewer well-pumping restrictions than other parts of the state.
The purchases totaling about 14,000 acres have rekindled debate over whether a patchwork of laws and court rulings in the West favors farmers too heavily, especially those who grow thirsty, low-profit crops such as alfalfa at a time when cities are urging people to take shorter showers, skip car washes and tear out grass lawns.
Recommended: How much do you know about Saudi Arabia? Take our quiz!
"It's not easy to completely grasp the business model of the Middle East, but it may not be about business at all," said John Szczepanski, director of the U.S. Forage Export Council. "The primary focus is food security, and the means to that end lie in acquiring the land and resources to ensure long-term supply."
For decades, Saudi Arabia attempted to grow its own water-intensive crops for food rather than rely on farms abroad. But it reversed that policy about eight years ago to protect scarce supplies.
To further conserve water, the country has adopted bans on selected crops. This year, the kingdom will no longer produce wheat. In December, the government announced the country will stop growing green fodder, livestock feed derived from crops like alfalfa, over the next three years.
Almarai already farms worldwide to make sure that weather, transportation problems or other conditions don't interrupt supplies. The expansion in the American Southwest was a "natural progression" in its effort to diversify supply, said Jordan Rose, an attorney for the company's Arizona unit.
"The cows feed multiple times a day, and they need to be certain that they are always able to fulfill that unwavering demand," she wrote.
Despite the widespread drought conditions, the U.S. is attractive to water-seeking companies because it has strong legal protections for agriculture, even though the price of land is higher than in other places.
"Southern California and Arizona have good water rights. Who knows if that will change, but that's the way things are now," said Daniel Putnam, an agronomist at the University of California, Davis.
Over the last decade, Saudi Arabia and the United Arab Emirates emerged as significant buyers of American hay as their governments moved to curb water use. Together they accounted for 10 percent of U.S. exports of alfalfa and other grasses last year.
The land purchases signal that Almarai doesn't just want to buy hay; it wants to grow. And it's not the only Arab-owned Gulf company to take that approach.
Al Dahra ACX Global Inc., a top U.S. hay exporter based in Bakersfield, California, is owned by Al Dahra Agriculture Co. of United Arab Emirates. It farms extensively in Southern California and Arizona and, according to its website, plans to add 7,500 acres in the United States for alfalfa and other crops. The exporter packages crops grown across the West at its two plants in California and one in Washington state.
Most of the farms that Arab companies own worldwide are in developing nations. For instance, Qatar's sovereign wealth fund has holdings in Latin America and Africa.
But part of the kingdom's long-term food security strategy means investing in higher-cost countries with greater political stability, said John Lawton, owner of Agriculture Technology Co., a farming company in Saudi Arabia.
In 2014, Almarai paid $47.5 million for more than 9,800 acres in La Paz County, Arizona, a sparsely populated alfalfa-growing region that is exempt from severe restrictions on pumping imposed on Phoenix, Tucson and other large Arizona cities under a 1980 state law designed to protect the state's aquifers.
It later turned to the Palo Verde Valley, where Southern California settlers staked claim to the Colorado River in 1877, beating Los Angeles and San Diego under a Gold Rush-era doctrine called "first in time, first in right" that governs the 1,450-mile waterway. The company paid $31.5 million for 1,790 acres in January after buying about 2,000 acres there last year.
Farmers and water experts have greeted Almarai with both cheers and jeers.
Supporters note that the company has embraced water-conservation methods that few other farmers have adopted. The Arizona Department of Water Resources released maps that show well levels on Almarai's property in La Paz County rose in recent years, and the farm's footprint has remained about the same since 2000.
In California, some farmers say Almarai is a well-run company that has boosted the economy by growing its own alfalfa and buying more hay from neighboring farmers. The company recently broke ground on a plant in California's Imperial Valley to package hay into ship-ready bales.
Others say the purchases highlight misguided water policies. La Paz County Supervisor Holly Irwin raises concern that Almarai will deplete wells.
"We've got them coming, moving in here and using our natural resources up. Why isn't anyone paying attention to the ground we live on?" she said.
Christopher Thornberg, an economist at the University of California at Riverside, called alfalfa farms a "shocking waste of a resource" and suggested California consider seizing land under eminent domain.
"At some point in time," he said, "we have to face the fact that the state cannot continue to prosper under the current circumstances."