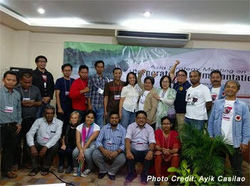 #NoLandNoLife
Groups plan campaign vs. corporate oil palm plantations, mark Day of the Landless
Press release
29 March 2016
JAKARTA, Indonesia – Advocacy group PAN Asia Pacific (PANAP) today joined peasant and indigenous groups, land activists, and human rights campaigners in the region in marking the global Day of the Landless through a solidarity action in Jakarta.
Together with the Asian Peasant Coalition (APC) and Asia Monitor Resource Center (AMRC), PANAP was among the organizers of the Asia Strategy Meeting on Corporate Palm Oil Plantations held in the Indonesian capital. Organizations from Bangladesh, India, Indonesia, Malaysia, Pakistan, the Philippines, Sri Lanka, Thailand and Hong Kong attended the meeting.
Peasant group AGRA (Aliansi Gerakan Reforma Agraria) organized a protest march in front of the President’s Palace in Jakarta, which targeted about 1,000 participants to highlight the Indonesian rural people’s struggle for land.
“Corporate oil palm plantations are one of the biggest drivers of land grabbing in Indonesia. About 29 million hectares of palm oil lands in our country are controlled by just 25 companies including Sinar Mas and the Wilmar group,” said Rahmat Ajiguna, AGRA chairperson and APC secretary general.
Around Indonesia, AGRA chapters and allies in 18 provinces also held simultaneous actions on the Day of the Landless, mobilizing about 10,000 small and landless farmers, indigenous peoples, rural women and other marginalized rural sectors.
“The strategy meeting on oil palm is timely amid the massive expansion of the industry. We need to launch a coordinated campaign that will expose and oppose the plantation companies and the investors that back them up including the transnational banks and international financial institutions like the World Bank,” APC chairperson Rafael Mariano said.
PANAP executive director Sarojeni Rengam, for her part, reiterated that solidarity through regional actions among mass movements campaigning on the ground against land grabbing must continue to be strengthened. “The landless people, including those displaced by corporate oil palm plantations, have been fighting back. An effective regional initiative needs to build on and highlight these struggles and victories,” Rengam said.
Rural folks are poor mainly due to landlessness. About eight out of 10 of the world’s poorest live in the rural areas, many of them from landless rural families. The advocacy group GRAIN estimates that a mere quarter of farmlands globally are in the hands of small farmers. This amid continuing threat of land grabbing by big corporations and investors. There are more than 1,000 land deals covering almost 38 million hectares worldwide, based on data compiled by the website Land Matrix.
29 March is a historic event in the people's struggle for land and resources in the Asia Pacific with the founding of the APC on the said date 13 years ago to challenge imperialist and feudal oppression and exploitation. The APC is composed of farmers, landless peasants, farmworkers, peasant women, fisherfolk, dalits, herders, pastoralists, indigenous peoples, rural youth and their allies. PANAP is an associate member of the APC.
PANAP and APC also launched the campaign “No Land, No Life!” on the Day of the Landless 2015 as a regional initiative to highlight the human rights aspect of land grabbing. ###
For more details, please contact Ms. Danica Castillo of the PANAP secretariat at [email protected]