On 3 February, President Santos signed the Zones of Rural, Economic and Social Interest Law (Zidres in Spanish) in the central-eastern department of Casanare. He could not have chosen a more defiant location. In this highland region (Altillanura), domestic and foreign companies see the potential for securing long-term investments to accumulate thousands of hectares of land. Indeed, congresspeople, academics and farmers have denounced the shortcuts used by these companies to acquire land, including vacant lands that exceed the limit established by the 1994 Law of Family Agricultural Units (Law 160). This scandal even resulted in the resignation of the Colombian ambassador to the United States, Carlos Urrutia. Urrutia had signed legal documents permitting the creation of fictitious companies that were listed as owners of properties, which in fact all belonged to the same company.

President Santos seemed to be saying that, through this law, those who seek justice in cases of land grabbing would ultimately get their revenge. However, the Zidres Law, which critics call the “Urrutia Law”, actually serves the interest of land grabbers [helping them access lands] in areas where there is little infrastructure, where the land needs a large investment in order to be productive, and where investors must demonstrate that they possess a large amount of capital. Most frightening are the acquisitions already made by companies like Cargill, Riopaila Castilla and Poligrow, in complete disregard for the law. 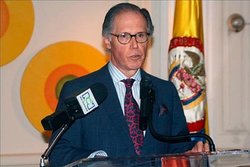 Urrutia had signed legal documents permitting the creation of fictitious companies that were listed as owners of properties, which in fact all belonged to the same company.

To see how truly shameless this is, it is helpful to quote from the first paragraph of Article 13: “Persons occupying vacant properties who, by the date of the Zidres declaration do not meet the requirements of Law 160 of 1994, may acquire legal title by linking with other productive projects as an association or via land use contracts, thus allowing them to utilise the rural lands they occupy.” Ownership of lands illegally occupied by land grabbers can also revert to the State but they are typically returned to the land grabber through a leasehold contract as a kind of money laundering.

It became clear through various media that a number of firms were lobbying to safeguard their investments. Fedepalma, for instance, whose board of directors includes Carlos Vigna Talianti of Poligrow and the Agricultural Society of Colombia (SAC in Spanish), were applying significant pressure on the government. Several months ago, Poligrow was demanding “legal security for its investments” despite serious allegations against the company including fraud, falsifying public documents and even criminal conspiracy.

With regard to environmental impacts, this law shows tremendous irresponsibility on the part of the government. The Altillanura region has little water to support monocultures and the consequences will be eroded soils and thirsty animals, women and men. What we’re seeing is the creation of free zones, irrigation systems and the diversion of vital water sources in order to support non-native plants. In recent congressional hearings, the Peace and Justice Commission revealed that Poligrow consumes 1.7 million liters of water daily for which it pays less than one million pesos (roughly US$325) per year, in a region that is running out of water due to the irresponsible actions of this company.

But the absurdity of the Zidres Law does not stop there. The lands of Afro-Colombian communities are highly vulnerable to corporate land grabbing. Paragraph one, article 29, states: “Community councils and/or legally-recognised authorities of peasant reserves and communal territories may present a request to the Ministry of the Interior and Ministry of Agriculture and Rural Development to be included within the production processes established by Zidres.” In the case of Curvaradó, the Ministry of the Interior controls the process of selecting legal representatives of the territory, effectively excluding Afro-mestiza women who are opposed to the companies involved in land grabbing and displacement in their territories—of which they have been the main victims. They [the Ministry of the Interior] impose a legal representative that will advance the interests of the land grabbers and endorse the agribusiness model promoted by the Ministry and outlined in the Zidres Law.

Hopefully, the claims of unconstitutionality filed by dozens of organisations and one congressional group will succeed in ending this nightmare.