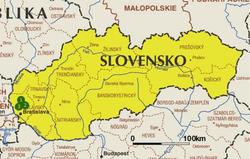 Danish farm operator FirstFarms says that it aims by 2020 to increase its farmed area in Slovakia from the current 9,300 hectares to 12,000 hectares.

FirstFarms unveiled plans to double its Eastern European farming area, potentially tapping into moves which could bring an "oversupply" of land for sale in Slovakia.

The farm operator said that aimed by 2020 to increase its farmed area in Slovakia from the current 9,300 hectares to 12,000 hectares.

The expansion plan, while focused on growth around existing farming hubs, also flagged "new production areas", although no further details on potential targets were revealed.

FirstFarms said that its strategy was based on operating and developing farms, "and not ultimately to own these".

However, "ownership is a possibility that is also applied", adding the group, which owns 587 hectares of land in Slovakia, and 5,168 hectares in Romania.

The strategy comes at a time when many Eastern European countries are, gradually, reforming often restrictive and complex land ownership regimes inherited from Soviet times.

"In both Slovakia and Romania, changes have been made in the legislation regarding purchase of land, so that the land shall be offered with pre-emptive rights for the farmers in the area," FirstFarms noted.

The group flagged in particular its desire to exploit reforms being talked of in Slovakia, where it currently rents most of land from SPF, which lets out farms on behalf of owners such as churches and local authorities "which are not allowed to sell their land".

"There is a political wish to change the present legislation so it among other things will be possible for the institutions/landowners to sell their land," FirstFarms said.

The group said that, assuming legislative changes are enacted, it "expects to get pre-emptive right to the rented land, and FirstFarms wants to utilise this".

Purchases could come at a time when the "more transparent and liquid market" ushered in by land reforms undermined prices.

"There is a possibility that an oversupply of land will occur, which can contribute to lower pricing on land."

The fall into the red reflected drought damage which hurt yields of spring-planted crops, besides lower grain prices, with weak dairy markets denting profitability at its milk production operations.

FirstFarms sold its milk at an average of DKK1.98 per kilogramme last year, compared with DKK2.61 in 2014, and forecast a further small drop in values to DKK 1.97 per kilogramme this year.

"There is a great uncertainty about the market conditions for milk and thus the expected price," the company said.

Nonetheless, with an improvement in cow productivity, and with operational "optimisation" group-wide, FirstFarms forecast breaking even at the operating level in 2016.