Now’s the time to really challenge the New Alliance 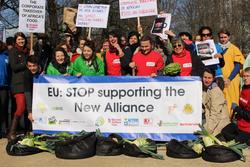 Tackling hunger and poverty on the continent of Africa evokes different responses but corporations together with rich countries are pushing through just one response: increase corporate control over land, seeds and farming inputs –all at the expense of small farmers who are the bedrock of food production on the continent.

The aid scheme, the New Alliance for Food Security and Nutrition, is at the forefront of this agenda. A noble sounding name masking a dangerous corporate take-over. Through the scheme, aid money and corporate investment are promised to the 10 countries signed up but in return these countries have to make changes to their seed and land laws which greatly benefit multi-national companies but are disastrous to small farmers.

The scheme has attracted widespread criticism and rejection. Last year over 100 farmers and civil society organisations from Africa and around the world called on all governments to pull out and withdraw funding from the New Alliance.

The European parliament is currently reviewing the New Alliance and commissioned an expert report, which also delivered a scathing critique of the scheme.