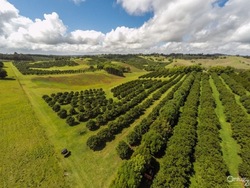 by LARRY SCHLESINGER AND MATTHEW CRANSTON
Nut grower and exporter Discovery Macadamia has bought the Dunoon Macadamia Plantations near Lismore in northern NSW for between $18 million and $20 million in one of the biggest recent deals for the burgeoning horticultural sector.
The plantations cover 545 hectares across four adjoining farms with 109,000 mature trees. They were put up for sale in 2013 by the Australian division of one of the largest institutional managers of agricultural real estate in the US, Hancock Farm Company.
Discovery Macadamia is a private syndicate of Chinese-born investors, who already own and manage 140 hectares of macadamia orchards near Eureka, 20 kilometres east of Dunoon.
Alex Yong, an assistant director at Discovery, said, "macadamias are still a very small part of the nut market - about 1 per cent - but it is growing.
"We sell our nuts to processor MPC in Lismore and Stahmann Farms in Toowoomba and we also export the nuts in shell to China," he said.
The sale was brokered by Jez McNamara, a director at Ray White Rural Queensland. He said rising macadamia prices - up from $3 a kilogram in 2011 to $5 in 2016 - had driven renewed interest in the sector.
'Macadamias have gone from being a niche market 10 years ago to a broadscale market now. I'm working with a number of people looking to purchase macadamia orchards," he said.
Last month, listed agricultural property trust, Rural Funds Group announced its first entry into macadamias, buying 259 hectares of orchards near Bundaberg in Queensland. Most of the orchards will be leased to the 2007 Macgrove Project, a managed investment scheme for growers.
The Australian Macadamia Society said Australia is the world's biggest macadamia producer, with the 2016 harvest forecast at 47,000 tonnes.
About 70 per cent of nuts are exported annually, worth about $120 million. Macadamias make a healthier cooking oil than olive or canola, have no cholesterol and are rich in vitamins.Echo | 11 March 2016
--


Chinese interests buy macadamia farms around Dunoon
The recent purchase by Chinese interests of four large macadamia farms in the Dunoon area with around 130,000 trees was approved by the federal government under its national interest test.
The four farms in the ‘macadamia capital of Australia’, totalling 380 hectares, were bought by Chinese investment group Discovery for around $18 million.
But Member for Page, Kevin Hogan, says no local jobs will be lost as a result of the sale.
Mr Hogan said the purchase had to be approved by the Foreign Investment Review Board as it exceeded the foreign investment threshold of $15 million.
A spokesman for the new owner told the ABC that it would not make sense to bring in workers from overseas to manage the farms, as Australian farms were already highly-mechanised and efficient.
Company spokesman Alex Yum told the ABC that Australian macadamia farms were known for their efficiency.
’For the same size farms in Australia we use five people to manage them, but if you put this kind of size farm in China we would use 100, maybe 200 people to manage… so it’s highly efficient here in Australia,’ he said.
Mr Hogan told Echonetdaily that all purchases of agricultural land, including on the north coast, that were over the $15 million limit ‘have gone through the National Interest Test’.
He said the Nationals at the last election ‘took a commitment to lower the foreign investment threshold from $250m to $15m’.
‘This is the level that the Foreign Investment Review Board investigate foreign purchases of land. They determine whether it is in the national interest or not. I am very disappointed Labor wants to increase this threshold to $50 million,’ he said.
Local real-estate agents say Chinese investors are keen to invest inmulti-million-dollar macadamia orchards in both NSW and Queensland to protect their supply.
According to ABC Rural, Australia exports nearly a quarter of its national crop to China, and local growers are already struggling to keep up with the strong demand.
Last year, Australia produced 48,300 tonnes of nuts in-shell, up 10 per cent on last year, and those numbers are tipped to rise again this year.
And prices have improved too.
In the 2014 season ,growers were getting around $3.50 per kilogram of nut in shell, but last year the price skyrocketed to around $4.50/kg.
The Australian Macadamia Society says about 10 per cent of macadamia farms are foreign owned and it is not concerned about any increase in that trend .
Jolyn Burnett, the society’s chief executive officer, told the ABC that there had been overseas investment in the Australian macadamia industry for many years, with ‘no more than a dozen out of 80 or more farms sold’.
But observers say many of the sales go largely unnoticed,  because the Foreign Investment Review Board only needs to scrutinise the sales if they are $15 million and above.
However, as of July last year all foreign sales need to be listed on a national register, regardless of price.
Mr Burnett told the ABC  in January that Australian companies are investing in macadamia businesses in South African, China and Hawaaii at similar levels.
‘An Australian is the biggest grower of macadamias in South Africa, an Australian company owns about a third of the macadamias in Hawaii,’ he said.
‘There are Australian shareholders in at least two orchards in China, so this foreign cross ownership goes both ways.’
He said that in most of the sales he’s been involved with, the investors want to keep Australian managers and workers on site.