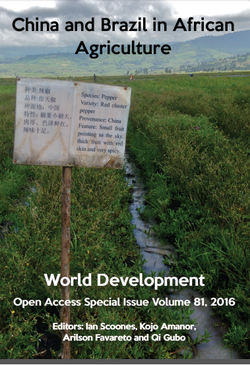 A new Open Access Special Issue in World Development based on our work on the changing role of China and Brazil in Africa’s agriculture is now available (links to individual articles are below, and also via here).

The work was developed under the ‘China and Brazil in African Agriculture’ project of the Future Agricultures Consortium. The project was supported by the UK Economic and Social Research Council (grant: ES/J013420/1) under the Rising Powers and Interdependent Futures programme.

The research involved studies in Ghana, Ethiopia, Mozambique and Zimbabwe, as well as China and Brazil. There were over 20 research collaborators involved, from Africa, China, Brazil and Europe, and it was a massively rich, if sometimes challenging, experience. Our research looked at 16 different case studies, involving a mix of agricultural investments by private and state owned enterprises, tri-lateral development cooperation efforts, technology demonstration initiatives, training programmes, as well as ‘under-the-radar’ involvement in agriculture by Chinese migrants.

There was no single story emerging, but a complex set of engagements, which contrast in important ways with existing patterns of western-led development and investment, and offer important opportunities for reflection and learning. These 8 papers (along with over 20 other Working Papers on the project website) are the result. Do download, read and send us feedback! It’s been a lot of work putting them together!

The papers examine how agricultural technologies, practices and policies travel across the world as part of investment and development cooperation. Technologies and policies always have histories, and emerge in particular social and political contexts. Yet China and Brazil both argue that theirs are perhaps especially relevant to Africa, given common agroecological conditions, and similar histories of agricultural development. We were interested in finding out how things travelled, and what happened during the journey.

Of course the transfer of technologies and policies, as we’ve long known, is not simple or linear. Assumptions are often deeply embedded (such as what a farmer is, what scale is appropriate, and how different sorts of technology are important), but they do not always translate into new contexts. Not surprisingly, despite the claims, not everything generated in Brazil and China has landed easily in Africa. There have been rejections, resistances, and so revisions and recastings; all of which highlight the importance of ‘development encounters’ and the negotiations about knowledge (and technology, practice, policy) that must go on during development cooperation – whether with a western aid agency or with Brazilian and Chinese actors.

Together, the papers show how historical experiences in Brazil and China, as well as domestic political and economic debates, affect how interventions are framed, and by whom, and so influence what technologies are chosen, which investments are funded, and who gets trained. The papers argue for a focus on the encounters on the ground, moving beyond the broader rhetoric and generic policy statements about South-South cooperation. For example, a key feature of Brazilian and Chinese engagements in African agriculture is the role of state-business relations in shaping and steering development; something that other agencies such as DFID interested in the role of the private sector, and public-private partnerships, might usefully learn from.

The special issue asks if a new paradigm for development cooperation is emerging, and argues that we must move beyond the simplistic narratives of either mutual benefit and ‘South-South’ collaboration or ‘neo-imperial’ expansion of ‘rising powers’. As the introductory paper argues, we need a more sophisticated account than this simplistic binary, and to “look at the dynamic and contested politics of engagement, as new forms of capital and technology enter African contexts”.

Do read, share and comment on the papers. We hope they will generate a debate about the role of the ‘rising powers’ in African development, and help us move towards a more nuanced appreciation and away from the rather simplistic frames that have dominated the debate to date.