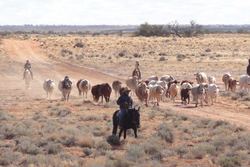 An Australian investment company has joined forces with a leading Chinese bidder for the iconic Kidman pastoral empire.

Key points:
- ARC announces to stock exchange it will partner with Shanghai Pengxin Group to buy Australia's largest private landholder
- Anna Creek Station will not be part of Shanghai Pengxin's offer
- If a bid is approved, domestic rivals will have four weeks to lodge a counter offer

Shanghai Pengxin was forced to rework its initial bid - thought to be around $370 million - after Federal Treasurer Scott Morrison last year said it was not in the national interest for him to approve a sale to a sole foreign buyer.

As well as pairing up with ARC, it is understood Shanghai Pengxin has removed Anna Creek Station from its purchase offer.

The station is the largest single parcel within the Kidman landholding and about half of it lies within the Woomera Prohibited Area in South Australia.

ARC said it would hold a direct ownership stake in the Kidman rural portfolio if the new joint bid was successful.

"It is the current intention of ARC to seek to raise equity funds in the Australian capital markets which will enable Australian investors the unique and direct opportunity to invest in Kidman in a fund and/or investment company managed by ARC," it said in a statement to the Australian Stock Exchange today.

ARC, which is capitalised at almost $4 million, said its strategy was to invest in, and manage investments in, agribusiness and agricultural infrastructure.

Its current focus is cotton, but in an address to shareholders last year, Executive Chairman James Jackson said the company was looking at opportunities in beef, sugar, wine and nuts.

The company's major shareholders include Mr Jackson, who runs a cattle business in northern New South Wales and who is also deputy chairman of Elders, and Stephen Chapman, the executive chairman of Australian investment bank, Baron Partners Ltd and the deputy chairman of natural healthcare company Blackmores Ltd.

Hong Kong based Genius Link Asset Management is also understood to be bidding for the Kidman empire.

The Treasurer will make a ruling on the reworked foreign bids after receiving a recommendation from the Foreign Investment Review Board.

If a bid is approved, domestic rivals will have four weeks to lodge a counter offer.

Australian transport magnate Lindsay Fox recently expressed his interest in the Kidman empire, which comprises about 2.6 per cent of Australia's agricultural land and 1.3 per cent of the country's entire landmass.

S. Kidman & Co runs 185,000 cattle and is one of the nation's largest beef producers, exporting to Japan, the US and South East Asia.