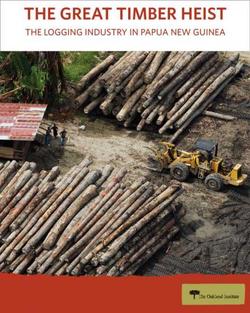 The Oakland Institute report is available here
ActNow! | 17 February 2016
Great Timber Heist emphasizes failure to cancel SABL leases
An explosive new report exposing tax evasion and financial misreporting by logging industry in PNG only emphasizes the need to cancel the unlawful SABL leases and stop the illegal logging says community advocacy group ACT NOW!
The Oakland Institute report The Great Timber Heist: The Logging Industry in Papua New Guinea, exposes how the logging industry avoids paying hundreds of millions of dollars in taxes, depriving the country of much needed revenues.
"These logging companies are destroying the livelihoods of local people by taking their lands and forest and now we see they are avoiding paying any taxes", says Campaign Coordinator, Eddie Tanago.

"This just reinforces the need for the government to take action, cancel the leases and stop the logging".
According to the report, many logging companies claim they make losses year after year yet they remain in business, which defies logic and common sense. It is alleged the companies are under declaring their income, through underpricing log exports, and inflating their expenses to avoid taxes.
More than 5 million hectares of forest has been stolen from local people using the fraudulent SABL leases. This is on top of the 10 million hectares already in the hands of the logging industry and has led to a huge increase in log export volumes such that PNG is now the largest exporter of tropical forest logs in the world.
In 2013, a Commission of Inquiry found massive issues in the issuing of the SABL leases including fraud, corruption and a lack of proper consultations with the local communities. It recommended the leases be revoked. Despite these findings, the government has done nothing to stop the logging and return the land to its traditional owners.
"Everybody is fed up with the Prime Ministers promises to take action and cancel the leases which never get implemented" says Eddie Tanago. "For three years he has been saying he supports the Commission findings and the leases will be revoked but we see the logging companies carrying on as usual while the landowners suffer."
ACT NOW! supports calls from the Oakland Institute for Papua New Guinea’s Internal Revenue Commission to urgently act on the report findings and investigate how despite decades of logging operations, the PNG forest industry barely declares any profit. There also needs to be meaningful action against those found guilty of any wrongdoing.