Women farmers and land grabs in Haiti: An interview with Iderle Brénus 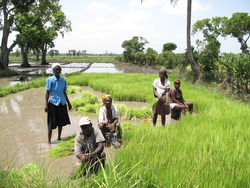 PAPDA, a coalition of nine Haitian organizations, supports rice cooperatives like this one in Northern Haiti as part of its commitment to women's leadership in local agricultural production against the backdrop of increasing land and resource grabs throughout the Caribbean nation. Image courtesy of Salena Tramel, for Grassroots International.
Women farmers and land grabs in Haiti:  An interview with Iderle Brénus

From an interview by Beverly Bell

In Haiti, the majority of the people working the land are women. Not only are they there during planting, weeding and harvesting, but they also play a role in transforming and marketing food products. They’re involved in the entire agricultural production process. This is why we call women the poto mitan, central pillar, of the country.

When a family is dispossessed of its land, women are victims. Rural women are the first to feel the pain. Ways that land theft and expulsions are affecting them need to be put on the table so the impacted women can be made a priority. There needs to be social, educational, technical, and economic support, and a lot of community organizing. The world needs to see what women suffer under land grabs and the neoliberal policies behind them.

No Land Rights for Women

Our constitution very clearly says that those who work the land have the rights to the land, but this has never been the reality. Haiti’s poor continue to be victims of land expropriation for the profit of others, which give a tiny minority rights over the riches of this country.

Today multinational corporations and other interests are taking cultivable land that used to produce food, and giving it to industries to make textile factories or other businesses that have nothing to do with food production - and in a country that is experiencing so much hunger. Those who are running the country profit, too. Elite landowners, who don’t even live in the country, own many thousands of hectares of land. The [Catholic] church, too is one of the institutions that owns a lot of land historically, and [rarely] does anything with it.

The problems around land ownership, occupation, and expropriation of land for the profit of multinational corporations - with the complicity of the government of Haiti - are especially grave for women. This isn’t anything new. These issues have always existed for peasant families, but it is taking on new dimensions. We see women – who already lacked access to and control of land, and who didn’t have control over production in economic terms – suffering even more.

Consequences of Land Grabs on Women

Even though a woman doesn’t hold the title to property - it’s rare to find one who has a title - she will work the land that her husband owns. She lives with, supports, and collaborates with the [husband or father’s] family to make sure that she and her children can eat, that her children can go to school, that she can pay for their health needs, for everything. All this is because in Haiti the population is mainly on its own; the state doesn’t provide any basic social services. The social services that had been there, even though they were minimal, have disappeared for the profit of neoliberal politics that have been applied in the country over the last 20 to 25 years.

Today, these women - who already lacked legal rights as property holders - are losing land access [and the social and economic benefits it brings] altogether. A woman can’t sleep well when she knows her children are hungry and she doesn’t have food to give them, or when they’re sick and she doesn’t have anything she can do for them.

With the destruction of the peasant class, we see these women who have lost their lands having to go to the towns to work in wealthier people’s homes or do other jobs. They have to leave their children with their mothers.

It’s women who have to make the decision to send their children to go stay with other people in Port-au-Prince. And many times, those children become restavek[literally “stay with,” children whose desperately poor parents give them to a relative or acquaintance to be cared for, but who usually end up instead in indentured servitude]. The majority are young girls, who are [forced to perform tasks like] cooking food for [other] children to go to school, while they don’t have access to school themselves.

The reason people in rural places send their children to stay with people in the city is hunger. If peasants had their land and technical support or credit from the bank so they could work,  they wouldn’t send their children to go get, as they say, a “better life.” If there were agrarian reform, within a framework of food sovereignty, you would find that the peasants wouldn’t have to send their children away. In 10 or 15 years, we could have a generation of well-educated young women who are ready to defend their rights so that women and men can have equal social roles.

Community organizations need to make themselves aware of the many invisible [political and economic causes] that are ravaging the peasant sector and women. Women and men should sit at the same table to think about how to construct this society together. It’s not just violence against women, but also other problems that attack the independence and economic resources of peasant women. These problems need to be visible to the whole world.

Community and peasant groups need to  make a strategic plan for what will be the priorities and objectives for merging women’s issues and land rights, and then launch a program that all the women’s organizations can participate in.

There should be more training for women, and more support to augment their technical, political, social, and economic capacity.

What’s most important, for starters, is consciousness-raising, training and action. It is necessary for community and peasant groups to raise women’s consciousness of these issues. We need to train them so that when they speak, they’ll really represent the sector and can show they know what they’re talking about. After that, women can mobilize [others] and organize actions - petitions, protests, things like that.

Challenges to Organizing as Peasant Women

Rural Haitian women face challenges in organizing around gender at several levels. First, women suffer from high levels of illiteracy and lack of education, so even when they’re in peasant organizations, there are a lot of decisions in the women’s movement that they can’t make.

Second, women don’t have economic means in Haiti. They don’t have the resources to advocate for their rights or to address problems related to land.

Another aspect, unfortunately, is that many [middle- and upper-class urban] women - who are at the head of the women’s movement - have a mentality of a social pyramid. There are Fanm [women] with a capital “F,” and there are fanm with a lower-case “f.”

In the movement, in the society, in neoliberal policies… it’s like the ground is being pulled out from under the feet of peasant women. Yes, we need outside assistance, but what we most need is our own organizing.


Iderle Brénus is an economist with a master’s from the University of Havana in small business and community development, and another master’s anticipated in development, with a special focus on gender equity, in Costa Rica.  From the peasant class herself, Brénus has long worked with the rural sector on food sovereignty, gender equity, and land rights

Many thanks to Winter R. Schneider for translating the interview and to Salena Tramel for use of her photo, taken for Grassroots International.

This is the fourth piece in a series on land rights and food sovereignty in Haiti, featuring critical research and analysis, as well as interviews with grassroots leaders and people affected by land grabs. The series is made possible through generous funding from the 11th Hour Project, American Jewish World Service, Anderson-Rogers Foundation, Ansara Family Fund, Bridge Fund of Tides Foundation, Mary N. Lloyd Memorial Fund of the Peace Development Fund, Maverick Fund of the Peace Development Fund, Presbyterian Church Hunger Program, Sisters of Mercy, Small Planet Fund of RSF Social Finance, and Tèt Ansanm Fund.
Copyleft Other Worlds. You may reprint this article in whole or in part. Please credit any text or original research you use to Beverly Bell, and Other Worlds.