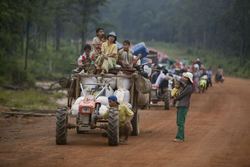 After more than 20 years, Germany is ending its work with the Land Management Ministry on land rights projects in frustration over the government’s slow reforms—another black eye for a sector at the center of some of the country’s most pressing human right issues.

Once Germany finishes phasing out its land rights work in June, it will leave Cambodia without a single international partner directly sup­porting the government in the sector, having already lost the help in recent years of Canada, Denmark, Finland and the World Bank.

“It has not been possible to find a consensus on certain major issues. This means that, to our mind, a number of important conditions al­lowing us to continue working suc­cessfully in this area are not in place,” Friedrich Kitschelt, a state sec­retary at Germany’s Ministry for Economic Cooperation and Development, wrote in a September 29 letter to Land Management Min­ister Im Chhun Lim.

Ms. Pilorge placed corruption, impunity, dysfunctional courts and a disregard for the poor at the top of the list.

“While there have been some im­provements on a technical level, the lack of genuine political will throughout [Germany’s] 20 years of cooperation has generally undermined attempts to implement pro-poor reforms,” she said.

A prime example, she said, was the now-defunct land titling project Germany worked on with the World Bank. Before the Bank pulled the plug on the project in 2009, just over 1 million private land titles had been handed out. But some 3,000 poor fam­ilies were also forced out of their homes in Phnom Penh’s Boeng Kak neighborhood after the government refused to accept their applications in order to make way for a CPP senator’s high-end real estate project.

The World Bank reluctantly admitted to making mistakes in designing and carrying out the pro­ject and accepted some blame for what happened, and in protest of the evictions put a freeze on all new lending to Cambodia in 2011. Even then, some rights groups were saying that the project’s other partners should at least reconsider their own support for the government’s land titling work.

Sophal Ear, author of “Aid Dependence in Cambodia,” said in an email that Germany should have pulled out back then, if not sooner.

“The state of land rights in Cambodia is certifiably dismal,” he said. “I’m surprised it took Germany this long to wake up and smell the coffee. The World Bank realized this years ago…. I guess the Germans never got the memo.”

Germany has spent some $27 million supporting the government’s land rights work since 2005.

Mr. Ear said the money would have been better spent elsewhere.

“Assuming Germany spent a bunch of money on government ad­visers on land rights, it should in­stead have poured all that money into advocacy groups helping people fight for their land rights instead, so that even while they lost they could at least document abuses, as the World Organization Against Tor­ture has done, for example.”

Germany’s ambassador to Cambodia, Joachim Baron von Mar­schall, said his country’s work with the government on land rights— going back to 1994—had helped to achieve much: more than 4 million private land titles, communal land titles for indigenous minority groups, social land concessions for land-poor families, a template for ef­fective zoning in urban areas, and more.

It has helped turn Cambodia into a country that did away with pri­vate land ownership under the Khmer Rouge into one with nascent land rights.

And even after June, the ambassador said, Germany would continue supporting related work help­ing farmers grow, market and sell their produces and the families that move onto the social land concessions it has helped set up.

“What is phasing out is the land rights program,” he said, “which we were conducting with the ministry, the land ministry, and which was really aiming at developing and improving capacity and exper­tise in the area, the technical area, of land titling, the cadastral system, the way of mapping out and stock-taking and all these things that are necessary to establish a proper land registration project.”

Germany’s decision to phase out of the land rights sector was not a sudden one.

It had been reviewing its work since at least 2014. In December of that year, Mr. Kitschelt, the German state secretary, wrote to Mr. Chhun Lim, the land management minister, outlining Germany’s main concerns and asking for a reply. The minister responded the following May. But when Mr. Kitschelt wrote back in September, announcing Ger­many’s decision to pull out, he said the minister’s answers had simply not been good enough.

Among Germany’s main concerns was the government’s lack of transparency.

“We have time and again stressed the importance of having a register which shows in an accurate way what public land the government has at its disposal and how it’s being used,” Mr. von Marschall said. “We feel that this is extremely important, and this register should be accessible to the general public. It is land that belongs to the country—it doesn’t belong to an individual—and there­fore the general public, we feel, has a right to know what the country owns.”

The ambassador conceded that some public land had yet to be surveyed, adding to the confusion about who owns what.

“But of course, what can be decided in the moment is whether one wants to make this transparent or not,” he said. “It’s just a political decision.”

Rights groups say that more than 700,000 Cambodians have been caught up in land disputes since 2000, whether they faced a ser­ious threat against their land, lost some of it, or lost it all. Almost every day of the year, someone some­where in Cambodia is pro­test­ing against a private company, powerful landowner or state institution accused of stealing land.

“In view of all the land disputes that exist…it is important to have an institution, an independent institution, which decides on how to settle these disputes, an institution where people who do not have the money to pay a lawyer, pay fees or whatever, can get justice and can effectively defend their property to which they are entitled. This, we feel, is a basic right,” Mr. von Marschall said.

“Because we have seen ourselves in Germany after the wall came down—there was public land that East Germany had expropriated from private owners that had been reprivatized—how important it is to have clarity on land rights, be­cause you will not get investors if this clarity is wanting. And for that, you need an institution that rules in a fair manner, in a way that everyone can accept, who is entitled to what part of land.

“Again, it seems that the gov­ern­ment is not yet prepared to have such an institution. This was particularly signaled to us.”

Cambodians caught up in land dis­putes can turn to their local cadastral commissions, local officials and the courts. After exhausting those options, many take their complaints straight to the Na­tional Assembly, even to Mr. Hun Sen himself, staking out a now well-trodden spot under a large ban­yan tree on the edge of Phnom Penh’s Wat Botum Park until a member of the prime minister’s cabinet arrives to take their petitions and jot down their personal details.

But Mr. von Marschall said the sheer number of bodies dealing with disputes—besides their lack of independence—was part of the problem.

“So it’s a very colorful array of in­stitutions dealing with this in what seems to me a fairly uncoordinated manner. This is—and perhaps I’m very German in this—this is not the way you will get the social peace you want,” he said.

“You could have an administrative court dealing with land matters. But what is essential is that this court would really—and not just pro forma on the paper—in substance, provide a way for a citizen to get a ruling that may even not just turn against a neighbor but turn against the government if it’s a dispute between a citizen and the government. The Consti­tution provides for this; the Cam­bo­dian Constitution says every citizen can challenge a decision of the government. But I have yet to hear of one case where that has ever successfully happened.”

Germany also would have liked Cambodia to fully commit to the U.N. Food and Agriculture Or­ganization’s voluntary guidelines on tenure rights and to work faster on approving communal land ti­tles, which are designed to protect ethnic minority communities from outside developers. The gov­ernment has issued 11 such titles to date but, by its own targets, should have approved 35.

A spokesman for the Ministry of Land Management, Cheam So­phalmakara, declined to comment on Germany’s decision to end its land rights work and re­ferred questions to another ministry spokes­man, Sarun Rithea, who could not be reached.

In his May 2015 letter to Mr. Kitschelt, Mr. Chhun Lim de­fen­ded Cambodia’s work on land rights.

He said the government had in­volved “all stakeholders,” invited civil society groups to join its cad­astral commissions, had 10 more communal land titles in the pipeline and canceled dozens of large-scale concessions accused of grabbing land, and was restructuring its land registration teams while systematically registering more land across the country.

“These efforts demonstrate the [government’s] commitment to en­suring the security of tenure and the sustainable use of natural re­sources,” the minister said.

Mr. von Marschall said he hoped that Germany, by ending its work on land rights with the min­istry, would spur the government to push ahead with reforming the sector by opening up about who owns what land and fi­nally setting up an independent body to adjudicate disputes.

“As I said, [a lack of] clarity with regard to the rights is detrimental to investment, to the in­vest­ment cli­mate,” the ambassador said. “Apart from the social aspects, of course, citizens who feel secure with regard to their rights are more happy and more productive than citizens who are living in fear. It’s a very simple truth.”

By dragging its feet on the re­forms Germany and other aid part­ners would like to see from Cam­bodia, he said, the government was doing itself no favors.

“There will be a degree of a lack of stability,” he said. “I see a di­rect relationship between the ability of the government to settle disputes in a way that is effective, and stability.”

Mr. Ear, the author and aca­demic, said Germany was right to pull its support if it felt it was doing nothing to make things better. But he doubted that pulling out would spur the government to action.

“If it means getting out altogether, including not supporting advocacy groups, then that will just leave the lambs to be eaten by the wolves. At least support the groups fighting for land rights to create more pressure on the authorities,” he said.