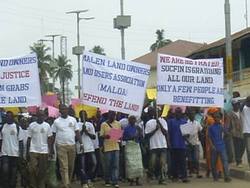 A High Court Judge in Sierra Leone on February 4 convicted six land rights activists of incitement, conspiracy to commit a crime and the destruction of 40 growing palm trees belonging to the Belgian agribusiness company SOCFIN. The six activists, all members of the Malen Affected Land Owners and Users Association (MALOA), were each sentenced to a minimum of five months imprisonment or pay a total fine of $35,000. The Judge ordered that the astronomical fines be paid at once or face imprisonment. The activists are currently languishing in jail.
We, the undermentioned organisations working to promote land rights and rule of law in Sierra Leone, are gravely concerned about the conviction and imprisonment of these activists. Without prejudice to the outcome of the judicial process, it is shocking that SOCFIN, which paid one million Leone (less than $200) for 60 palm trees in the Malen Chiefdom (which is about one acre), had valued the 40 trees which were destroyed at two hundred million Leones ($36,000). Curiously, the Court imposed a sentence that was very much consistent with the company’s estimated value of the trees.
“This clearly shows that the people of MALOA have always been justified in describing the current land agreements by which land owning families receive only $6.25 for a hectare of land annually as unfair,” said Joseph Rahall of Green Scenery – Sierra Leone.

We believe that the just concluded case, along with several other ongoing legal actions against members of MALOA, is a deliberate ploy by SOCFIN with support from local authorities to intimidate and cower them into submission.  We are convinced that the activists of MALOA have genuine concerns about the activities of SOCFIN in Pujehun District, which is why we will continue to support them in their campaign to bring about fair, transparent and economically sensible agreements for the vast tract of land which the company has grabbed.
As members of MALOA have always maintained, we have nothing against foreign investors in Sierra Leone, but we strongly believe that these large scale land acquisitions have unfairly dispossessed locals of their heritage, and have made them poorer and less food secure.
“Despite several years of campaign for these agreements to be reviewed, it is regrettable that the Sierra Leone Government and traditional authorities have turned a blind eye on clearly one of the gravest human rights issues of our times. It is curious, though, that the wheels of justice and law enforcement mechanisms seem to always move faster against these activists,” said Ibrahim Tommy, Executive Director of Centre for Accountability and Rule of Law.
Since the verdict was delivered, civil society organisations in collaboration with various partners have launched a fundraising initiative aimed at paying the exorbitant fines. We are pleased with the progress we have made so far, but we urge other well-meaning Sierra Leoneans to support us in our fundraising drive as we try to emancipate these activists.

Regrettably, more than a week since the verdict was handed down and in spite of several efforts, defence lawyers and other interested parties has not been able to obtain a copy of the verdict. We urge the judiciary of Sierra Leone to make a copy of the verdict available to us so that we can determine whether there are legitimate grounds of appeal.