'Agro investors must be flexible' 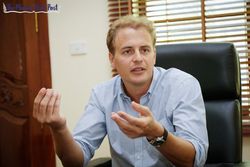 Agro investors must be flexible

French agribusiness Socfin Group, which has managed rubber plantations in Cambodia since 2008, has seen rubber prices plummet and land claims multiply while waiting for its first returns on investment. The Post’s Ananth Baliga sat down with Jef Boedt, general manager of Socfin Cambodia, to discuss the company’s investment in Cambodia and operating challenges.

Why did Socfin decide to invest in rubber plantations in Cambodia?

We are one of the oldest agro-industrial companies in the world. We’ve been doing this for 120 years. Today we are working in 10 different countries, mostly in Africa and Southeast Asia. In Cambodia, we started in 2008 and we have two plantations in Mondulkiri province. We’ve planted 7,500 hectares in total of rubber trees. We have already invested $80 million, and for that, we also need a big social infrastructure. Because today we have 600 employees and eventually we will have 2,000. We estimate over 10,000 people are living on our concessions.

What is the status of your operations in Cambodia?

We are still in an investment phase. Our concessions are completely planted, but rubber is a long-term business. You plant a tree and it takes six years to be ready for harvest. We’re on the cusp of moving from an investment phase to production. As of now, we are producing on 500 hectares. For us that is still small and it’s the first test, because we’ve had a long dry period in Cambodia. If you follow our investment phase we’ve planted around 1,000 hectares every year, so if you calculate, in the next six years we will be at full production.

Global rubber prices have dropped off sharply in recent years. How will this affect your project’s business plan?

Unfortunately, we are going to be producing when prices are low. But we know we’re here for the long haul and we know that rubber prices are following cycles. In our business plan we are prepared for that. And that doesn’t change our plans. We have to be more careful and emphasise more on cost effectiveness and fine tuning of the operations. It is more of an issue for other plantations owned by our group in Africa, where production costs are set at certain levels and very much linked with the price. Today, even if the prices were high, we would not make any profits [in Cambodia]. Profits in our business plan are projected around year 12 and 13.

What are your expectations for rubber prices?

Being in the rubber business I am always hoping rubber prices will go up fast. But these rubber prices are linked to raw materials that have very low prices as well. And I don’t think immediate changes are going to come soon. It will be 2018 or 2019 before things begin to brighten.

Why have many land concessions in Cambodia handled land right issues, especially with ethnic and minority communities, so poorly?

Now if you look for example at our project in Mondulkiri province, it is part of a development program in the country and it has been driven and controlled under the impulse of the authorities. It is important to say these land concessions are the ownership of the government and it is the government that decides what is happens with this land.

For us, since the beginning of the project we have been in close discussion with the people and authorities. There were public meetings and “free, prior, informed consent” was followed. Unfortunately, they are not following their master plans everywhere. And that is why ELCs [economic land concessions] are very much criticised today, because owners are not respecting the master plan.

There have been allegations against Socfin that the company made people sign documents without knowing the content, or bulldozed their property. How do you respond to this?

There were 846 requests from 492 families for compensation. We accepted 819 requests and the ones that we did not accept the reason was because every request was studied and we created a special administration to interview the people and go to their land and get measurements. We get attacked by those saying we forced the people, but the reality is there was always the option not to accept. There could be people that retroactively do not agree with the compensation. This area is witnessing heavy land speculation and this has to be put in perspective.

Regarding these claims, it is because of the recent migration of people from the lowlands. They install themselves on a piece of land and resell it for a higher value. This is not only on our concession, but everywhere.

Locals say there was no follow-up after representatives met one of your shareholders, Vincent Bollore, in France to resolve issues. Is this true?

It took three years to get that special administration and every claim was followed up. What we saw was that a year or two after doing this, new claims came up. It began with 10 claims and it has reached 100, and we are reopening these files and restudying all of them. For that we also created a tripartite committee where we have the elected representatives of the villages, authorities and our company.

It is presented as a lot of claims, but it is individual claims and it is about money. The people would like to have more money, whereas we support more collective claims because we would like to support the entire commune. We do not have outcomes yet.

Socfin claims to have a no-deforestation policy. How does this work?

People immediately think that they have planted so much rubber yet they are claiming zero deforestation. But the reality is that we follow the guidelines defined by organisations like the FAO and look at the definition of what is a forest, high conservation value forest, degraded forests, etc. Our operations are only in places with degraded forest. When you make the conversion to rubber forests it is recognised to have the same characteristics as a planted forest. So here the term of deforestation doesn’t apply.

This interview has been edited for length and clarity.