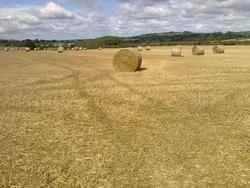 In what looks to be a prelude to the "water wars," Saudi Arabia has been buying up farmland in the southwestern part of the U.S. to grow alfalfa hay that is then shipped back to Saudi Arabia to feed its dairy cattle because it doesn't have enough water.
Farmers in the southwestern states, including Arizona and California, are hopping mad now that the story has come out. Saudi Arabia's Almarai Company, through its fully owned subsidiary Fondomonte, bought 1,790 acres of farmland in Blythe, California for nearly $32 million.

The Blythe location is an agricultural town along the Colorado River. Food giant Almarai bought an additional 10,000 acres of farmland about 50 miles away, in Vicksburg, Arizona for $48 million.

On Sunday, Almarai in a statement published on the Saudi stock exchange website said, "this transaction forms a part of Almarai’s continuous efforts to improve and secure its supply of the highest quality alfalfa hay from outside the Kingdom of Saudi Arabia to support its dairy business," according to the Saudi Gazette.

The statement went on to explain fully the purpose of the land purchases in the U.S., saying the acquisition was in line with the Saudi government's direction to conserve local resources. So while preserving their local resources, they are using our local resources, according to U.S. farmers, according to Newser.
CNBC reports that Keith Murfield, CEO of United Dairymen of Arizona, a Tempe-Arizona based dairy cooperative whose members also buy alfalfa, said the transactions was akin to "exporting our water." In Saudi Arabia, "they have decided that it's better to bring feed in rather than to empty their water reserves," said Murfield.
La Paz County Board of Supervisors Chairman Holly Irwin, who represents a rural area in Arizona where the Saudis have been moving in to do nothing more than farm and export alfalfa back to their country, says, "We're not getting oil for free, so why are we giving our water away for free?"

Irwin added, "We're letting them come over here and use up our resources. It's very frustrating for me, especially when I have residents telling me that their wells are going dry and they have to dig a lot deeper for water. It's costly for them to drill new wells." The Saudis have also been careful to buy land where there are few restrictions on groundwater consumption, Irwin noted.

Westec President Joseph Dutra, has served as a consultant to international companies looking to buy land in the U.S. He says it wouldn't surprise him if more land in this country wasn't bought up by Saudi Arabia. He says, "It makes logical sense for them to do that because they're not going to be able to grow it in Saudi Arabia, especially for milk production."

Besides the Gulf countries, China, South Korea, and Japan are big buyers of American hay. China buys as much as 20 percent of our hay, however, hay exports to Asia cooled a bit last year because hay inventories rose overseas and the U.S. dollar made U.S. agricultural crops too expensive to buy.

Daniel Putnam, an alfalfa and forage specialist with the University of California-Davis, says, "We do live in a globalized marketplace and the fact that we ship food to China and Japan and ship automobiles back to the United States is part of the globalization of our marketplace." He adds that regardless of the crop, there is a worldwide demand for American crops.