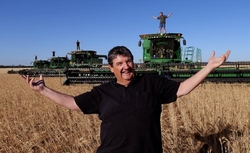 Grain grower John Nicoletti has agreed to sell his farms for about $35 million to a Chinese company with strong links to the family of Li Ka-shing, one of Asia’s richest men. (Photo: Nic Ellis/The West Australian)
West Australian | 21 January 2016

Chinese buy big WA farms in $35 million deal
by Brad Thompson
Chinese interests are on the verge of securing farms covering almost 70,000ha after the biggest single offering of freehold land in WA’s history.
The deal between John Nicoletti — once regarded as WA’s biggest grain grower — and Hong Kong-based CK Life Sciences is done pending approval from the Foreign Investment Review Board.
Chinese firm cuts cattle station deal
CK Life is expected to pay close to $35 million for Mr Nicoletti’s farms in the eastern Wheatbelt and near Mullewa. He will continue farming under a 10-year sale and leaseback arrangement and use the proceeds to pay off debt.
The 61-year-old, who has lost about 50kg since lap-band surgery, is looking forward to spending more time with his five grandchildren once the sale lifts the debt burden from his shoulders.
Mr Nicoletti paid tribute to banks for standing by him in recent years when the collapse of his farming business would have spelt disaster for other Wheatbelt farmers.
Until recently Mr Nicoletti’s operations spanned 140,000ha owned and leased by his farming company.
A run of poor seasons came to a head early in 2013 when the farming giant revealed he owed the ANZ about $40 million and was struggling to get finance to plant a crop.
Mr Nicoletti, who stressed the sale of his farms was not finalised, said some of the criticism of banks in the farming sector was unfair.
“The bank has been wonderful to me, really supportive and understanding,” he said.
“If they had pulled the plug on me back in 2013, it would have been disastrous for agriculture out here. It might have seen land values drop to $70 a hectare. This deal sets the land value at that close to $300/ha it doesn’t matter.”
Mr Nicoletti produced about 1.2 tonnes of wheat a hectare in the harvest just completed, his best result for several years from farms located in low rainfall areas. “I have tremendous people around me and while they stay with me my job is easy,” he said of the prospect of continuing to run the farms under lease for the next decade.
“I get a lot of satisfaction from the fact we can go out and spray a paddock, put a crop in and grow wheat to feed the world. It is the same when I load 2000 lambs on a truck and they go to slaughter.”
CBRE director of agribusiness Danny Thomas, who is handling the sale, said there had been almost 100 inquiries about the Nicoletti farms.
“It was about 50-50 overseas and local interest,” he said.
“The local interest was strong — there was a lot of institutional interest.”
CK Life already has substantial investments in Australian agriculture. It holds a majority share in the Challenger Wine Trust, which has interests in a string of vineyards, and owns Cheetham Salt, Amgrow (farm products) and Accensi (crop protection).
It has strong links to the family of Li Ka-shing, one of Asia’s richest men.