Last year, Ding Xuedong, chief executive officer of China Investment Corp. (CIC), the country’s $650 million sovereign wealth fund, put the the issue of food security squarely on the agenda for state-owned investors. In a June 2014 op-ed piece for the Financial Times, he wrote that the fund was planning to partner with governments, multilateral organizations, and institutional investors to increase world’s food supply and generate profits.

CIC is not alone. Other sovereign wealth funds are acting to protect their countries from food shortages, particularly in the Middle East. They are plowing money into land, farms and forestry as well as agricultural businesses. In the last 10 years, 14 state-owned funds executed 51 deals worth at least $11.1 billion in the industry according to Sovereign Wealth Center (SWC) data. These include the Abu Dhabi Investment Council (ADIC), Singapore’s GIC and Temasek Holdings.

For some, its a matter of national security. Qatar, for example, depends on imports for more than 95 percent of its food products. Just seven countries supply 75 percent of Qatar’s food imports, and the government sees this exposure as an unacceptable risk.

The Qatar Investment Authority (QIA) is seeking to hedge the state against possible food price increases. It is doing so through a series of diverse investments. In 2008 QIA-owned Barwa, bought a local partner, Hassad Food Co., from its parent and financed it with $1 billion to invest in agricultural companies around the world. Hassan, originally intended to buy existing food companies, is now purchasing and developing farmland. 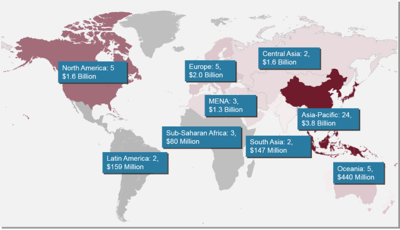 In 2009, Hassad paid $200 million for 200,000 hectares of pastures in New South Wales, Queensland, Victoria and Western Australia and invested $100 million in a joint venture with the Sudanese government to cultivate 8,094 hectares of wheat, corn and soy in the northern part of that country. The same year, Hassad hired Oman’s A’Saffa Poultry to develop a $68.5 million poultry project to secure food supplies in Qatar.

There are hurdles. Investing in Latin America became more challenging in August 2010 after the Brazilian government blocked major land purchases by foreigners. That year, QIA pulled out of a sugar project in Brazil due to regulatory challenges. The fund invested in one of South America’s largest agribusinesses, Buenos Aires-based Adecoagro, via its Al Gharrafa Investment Co. subsidiary.

Sovereign funds paused their agricultural investing in the region after 2010 due to strengthening local currencies and rising prices. Now some sub-sectors are becoming attractive. In Brazil, the world’s largest sugar market, an increasing number of cane mills are going bankrupt, offering investment opportunities as they restructure their debt.

"We have a lot of stuff in our pipeline and Brazil is definitely part of that, not only sugar but also poultry," said Youssef Hegazy vice president for business development at Hassad Food, at the Global AgInvesting Middle East conference in Dubai last month. "We realise there are structural issues in both industries in Brazil, like high debt," Hegazy added.

Sovereign funds are also moving into the complementary chemical sector, committing capital to potash mines and fertilizer-makers. Since 2005 the Sovereign Wealth Center recorded 8 such investments for a total of just over $3 billion. 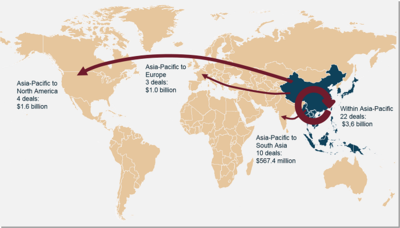 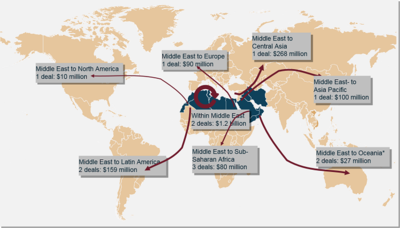 In one deal, in September 2013, CIC moved to bolster China’s position in the potash market. China is the world’s largest importer of the fertilizer, which is part of an oligopolistic industry. CIC converted bond holdings in OAO Uralkali into a 12.5 percent equity stake in the Russian company, taking a seat on its board and gaining insight into its pricing policies. Producers are no longer tied together in a cartel and big potash importers like China and India have benefited.

Still, the most valuable assets involve the trading of soft commodities, like wheat and cotton, food processing and agribusiness services, such as storage. Sovereign funds were involved in with 23 transactions for a total of $5.6 billion since 2005. In 2012 when Singapore’s state investor Temasek Holdings, defended one of its portfolio companies, the Singapore—based Olam International—a world’s leading trader in cocoa, coffee and rice —from a 2012 short-selling campaign.

Following the publication of Muddy Waters’ research, Olam’s share price cratered in the U.S. over-the-counter market, and the Singapore Exchange suspended trading in the stock for one day. Temasek pumped $712.5 million into the company, boosting its stake to 24 from 16 percent. A year later, in March 2014 Temasek moved to take over Olam for $2.1 billion.

In September 2014, only three months after CIC’s CEO Xuedong pledged to invest more in agriculture and food suppliers the fund announced it was selling one-third of its holding in Hong Kong-based Noble Group, a big commodities trader. As CIC sold , Chaoyang, China-based COFCO Corp., bought 51 percent of Noble's agricultural trading arm, Noble Agri for about $3.2 billion. COFCO brought in a consortium, led by Temasek’s regular deal partner Hopu Investments, a Beijing-based private equity firm, to finance one third of its stake.