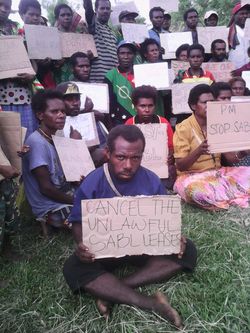 Support growing for the cancellation of the unlawful SABLs. Photo: Gregory Suguman
West Sepik against SABLs


Youth leaders in the West Sepik Province spent the last 3 months of 2015, spreading the word on the importance of protecting their customary land and how land has been taken throughout the country by the Government and given to dubious foreign logging companies through Special Agriculture Business Leases (SABL).

The awareness took place in four (4) LLGs areas in the West Sepik Province. The people in the Local Level Government (LLG) areas of Palai, Yankok, Maimai 11 and Nuku were recipients of these awareness by youth from the area who reside in Madang and are members of the association Tropical Gems.

There are estimated 20 villages in total in these 4 LLG areas. Locals in the area had witnessed overtime logging activities and promises of palm oil development but had not been aware that some of these activities are taking place under illegal SABL arrangement. Majority of the villagers and village elders were devastated to hear that the Papua New Guinea (PNG) government is encouraging a partnership with foreigners using SABL with no awareness or prior informed consent of customary landowners.

Many of them believe giving away land for 99 years is outrageous and feel insecure about their future especially when they are the very people (not the leaders or the officers in the Lands Department) who are now left to suffer consequences of illegal logging on their land.

They demanded that the PNG Government must cancel the illegal SABLs and return their customary land. Why can't the government spend money on creating awareness of joint ventures or partnership with local people rather than converting our customary land to State Leases and giving it away to foreigners to do THEIR business, in which we have no direct benefits ?

Awareness will continue to take place in more villages in other LLGs in West Sepik till February 2016.