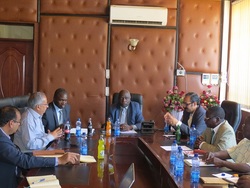 Siaya Government | 17 February 2015
Siaya investment bonanza
Siaya county could benefit from a huge investment bonanza thanks to Farmlands of Africa INC from India who have pledged to invest up to Ksh8 billion in projects in the county.
The Indian arm of Farmlands of Africa; a global conglomerate is set to revive the collapsed Ndere cotton ginnery, launch a rice cultivation project in Yala swamp, improve machinery in a passion fruit processing plant and a dairy plant known as Mur Malanga if negotiations are fruitful.
Speaking at a press conference in Siaya County the chairman of the company S N Kumar Buddhavarapu said Siaya will benefit a great deal from the Sh8 billion and encouraged the farmers to work hard in their farms.
"We want to invest in dairy unit, fruit processing plant and the cotton ginnery. Agriculture and agri-business is our priority and there is a ready market for the produce. We want to start a project of rice cultivation in Yala swamp as well,"said Buddhavarapu.
The chairman said that the company is set to grow rice and vegetables in the next season and hence the interest to expand in East Africa.
"We will offer the latest machinery to ensure you have high technology and quality seeds. After the industries have picked up, we expect the farmers to benefit greatly. The amount set aside for investing in Kenya will be used in the next two or three years,"  Buddhavarapu added.
The county was initially known for cotton production in the last few decades but has since gone on its knees after the collapse of Ndere ginnery in 2012.
The ginnery which employed only 48 people in the past is set to employ thousands of residents when revived.
Last month Siaya Governor Cornel Rasanga accompanied former Premier Raila Odinga in a visit to India, where he met the investors.
The chief officer in charge of Agriculture and irrigation in the county Jacton Nyapola Ondiko stated that with the revival of the ginnery Siaya youths now have a bright future.
"This is a chance for all the cotton farmers from the county to grow and develop. Over 200,000 cotton farmers that work so hard will not regret any more. We want to revive the cotton cooperatives, train, sensitize farmers and most important we will ensure a lot of capacity building for the farmers ahead of the investment," said Ondiko.
Ondiko further added that 70 percent of products from Yala swamp are used at domestic level with the rest being used to generate modest incomes.
"High food production within the county will help fight food insecurity which has been a major setback to the county. The county administration already bought 7 tractors and hired 30 more to mechanize and increase the area under cultivation," added the Chief Officer.
Ondiko said that Siaya is a sleeping agricultural giant given the number of perennial rivers, namely Yala and Nzoia that traverse the County. He said that the rivers could not only support power generation but also intensive irrigation..