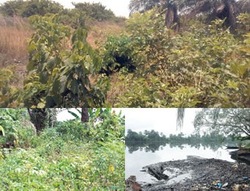 He added that the aim of the workshop was to ensure that community forests continue to be managed by community-based forests’ management system that ensured conservation and sustainable development.
He said: “It is important to note that community-based advocacy that is complemented by international effort can bring multinational corporations to account for their corporate impunity and excesses. The challenge to us is to be a voice for the impacted community in mobilising for actions, resisting expansion of land grabbing and theft.”
The high point of the conference was a presentation on land grabbing cases in the country, experiences and strategies for community mobilisation against deforestation and corporate land grabs by a resource person, Dr Sese Ekaye of the Department of Animal Science and Environmental Biology of the University of Benin.