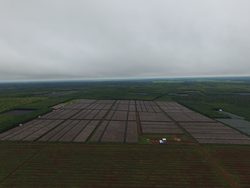 Sum Manet
South Korean-owned Welt Bio Co. Ltd. is investing $40 million in a pepper plantation in Mondulkiri. This is being described as the largest in the world, according to the news agency AKP.
Pepper from the 500-hectare plantation will be exported around the globe, it said. Kim Yuong Jung, its CEO, told AKP that the company will sell high-quality Cambodian pepper under its own brand.
Welt Bio plans to bring new technology and experts from Korea to create the plantation.
Khann Samban, director of the department of industrial crops at the Ministry of Agriculture, said pepper is grown in 18 provinces, but the main plantation area is Tbong Khmum province. According to the agriculture ministry, the plantation area for black pepper increased by more than 40 percent in 2015, from 2,653 hectares in 2014 to 4,645 hectares last year. Production rose from about 7,500 tons in 2014 to about 9,800 tons last year.
This year, officials believe the total will reach 11,000 tons as the cultivation areas expand to meet rising demand and rising prices. Fifty-eight tons of Kampot pepper was harvested  in 2015, up from 33 tons in 2013, according a report from the Kampot Pepper Association. It expects to reach 70 to 80 tons this year.
Kampot pepper already has a growing profile in Western countries, like the US and Germany, where it sells for $15 per kilogram on average.
A report by the International Pepper Community said Cambodia produced about 8,000 tons of black pepper for domestic consumption and export last year, 9,000 tons in 2015 and is forecast to produce 11,000 tons in 2016.