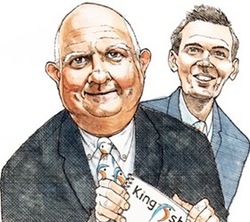 The Kingfisher Pension Scheme’s head of pensions, Dermot Courtier (pictured left) and pension investment manager, Matt Fuller (right). Last year, the pension scheme began investing in farmland through a global farmland fund managed by Insight Investment Management
Pensions Expert | 31 August 2015
Kingfisher locks in gains as funding hits triggers
by Sarah Cowburn
Kingfisher pension scheme has continued to progress towards its 2030 buyout target with a £150m shift from return-seeking to matching assets after tipping into surplus.
Falling gilt yields have driven a sharp rise in many schemes' deficits over the past 18 months, but within this environment several funds have managed to closed the gap on liabilities and are eyeing routes to buyout.
Cover graphic
Earlier this year, Invensys Pension Scheme launched a three-pronged attack on its liabilities after hitting a surplus of £121m.
At the bigger scheme end there is definitely a drive by companies to get rid of the millstone around their neck
Hugh Nolan, JLT Employee Benefits
The Kingfisher pension scheme has made several moves to close its deficit since its 2010 valuation, including the creation of a special purpose vehicle worth £202m. Kingfisher’s deficit reduced to £21m in 2013 from £170m in 2010 as a result of the SPV and employer contributions.
In the year to end-March 2015, asset returns of 29.8 per cent lifted Kingfisher’s funding ratio to 109 per cent – giving it a £194m surplus on an IAS 19 accounting basis.
Trustees of the home improvement retailer’s £3bn defined benefit scheme locked in funding gains by moving £100m out of return-seeking assets into its matching portfolio.
Further improvements in scheme funding triggered an additional £50m move into matching assets between April and May this year, boosting the scheme’s matching portfolio to 77 per cent of total assets.
Strategic review
Last year trustees added a global farmland fund and a direct lending allocation to the scheme’s return-seeking portfolio following a strategic review of its return-seeking assets.
Trustees reviewed the fund’s matching assets in 2014-15 and established three new portfolios during the year: two in absolute return bonds and one in multi-asset credit.
Dermot Courtier, scheme secretary, said the fund was “slightly ahead of the market” disinvesting its corporate bond market exposure previously held across five broad investment-grade portfolios.
“[With] two absolute return bond funds and a multi-asset credit fund on a complementary basis, we’re looking to generate cash-plus return… irrespective of what happens to interest rates and the bond markets, going forward we feel best prepared,” said Courtier.
Road to buyout
As schemes approach full funding and begin to assess the trajectory towards buyout, careful planning is required to ensure long-term targets are reached.
Rod Goodyer, partner at consultancy Barnett Waddingham, said schemes that are fully funded on a technical provisions basis need to map out the route to their longer-term targets and ensure derisking activity does not impede progress towards buyout.
“If your aim is to get to self-sufficiency or buyout then actually that might imply you retain some of your return-seeking assets even if your technical provisions might imply that you can go quite far on derisking,” said Goodyer.
“This idea of using multi-asset credit and absolute return bonds – those kinds of strategies work very well alongside an LDI programme. You’re still targeting some upside but in a much more steady way,” he added.
Hugh Nolan, chief actuary at consultancy JLT Employee Benefits, said a sponsor’s approach to improving scheme funding and ultimately reaching buyout was often dictated by the size of the scheme relative to the company.
He said: “At the bigger scheme end there is definitely a drive by companies to get rid of the millstone around their neck [by] pumping money in, and taking risk off the table on the investment strategy because they’ve had their fingers badly burnt by the scheme for years.
“Where the schemes are smaller relative to the company size they’ve got good security… so they can take a bit more risk and the company seems quite relaxed about letting the liabilities run on.”
2030 target
Matt Fuller, head of investment at Kingfisher Pension Scheme, said the fund was “well advanced down the road” to full funding on a buyout basis by 2030 and had continued to increase its interest rate and inflation hedging.
Fuller said: “Back at the start of 2014, during our matching asset review looking at the liability-driven investment mandate, yields were already fairly low.
“Trustees weren’t certain they were going to rise any time soon so we increased the hedge at that stage to 79 per cent on interest rate and inflation, and actually have increased it subsequently to 86 per cent on inflation and 83 per cent on an interest rate basis.”
Further review of the scheme’s derisking of investments and benefits will take place next year as part of its triennial valuation.
Courtier said: “With that self-sufficiency target in mind, between trustees and employers that’s quite a collaborative approach. The whole strategy is focused on that higher funding level to make sure we keep on track.”