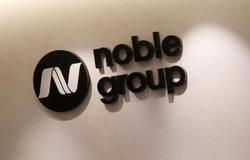 By Josephine Mason and Umesh Desai
Noble Group Ltd said on Tuesday it would sell its remaining 49 percent stake in its agribusiness to China's state-owned COFCO International Ltd, exiting agricultural markets as Asia's biggest commodity merchant seeks to slash debt.
The $750 million cash deal will hand COFCO full ownership of Noble Agri, which will be renamed COFCO Agri. It will handle everything from corn to sugar to cocoa and fertilizer, as China, the world's top commodities buyer, seeks greater access to food.
The purchase will also expand COFCO's global footprint in agricultural markets, rivalling the "ABCD" quartet of companies -- Archer Daniels Midland, Bunge, Cargill [CARG.UL] and Louis Dreyfus [AKIRAU.UL]. COFCO bought an initial 51 percent stake in Noble Agri in April 2014.
"The acquisition will greatly accelerate COFCO's internationalization and global positioning," Chairman Frank Gaoning Ning, said in a statement, adding that COFCO was bullish on the long-term outlook for the business.
The terms of the deal also include an additional deferred payment of up to $200 million if the business is listed on a stock market or sold, and also based on the unit's future performance.
For Noble, the deal is a major step towards helping it retain its investment grade credit rating and repair investor confidence after a bruising accounting dispute.
Noble said the proceeds will go toward paying off debt, which stood at $4.2 billion at end-September, exceeding Chief Executive Yusuf Alireza's pledge last month to raise $500 million through asset sales and strategic partnerships. The deal will also result in a non-cash loss of $546 million.
"It is a nice Christmas bonus for both stock and bondholders as it removes an earnings drag from the income statement and provides immediate debt reduction to the balance sheet," said Andrew DeVries, analyst at independent researchers CreditSights.
"This should also buy Noble management some crucial time with the agencies who have them on review for downgrade to junk," he added.
Noble shares rose as much as 4.5 percent on Wednesday after the deal was announced. Its bonds have been steadily rising since Reuters first reported the deal last week.
The bonds due 2020 edged up to around 69 cents on the dollar on Wednesday. They were trading at around 63 cents a week ago.
INVESTMENT GRADE
Noble said the sale will put its financial metrics in excess of those required of an investment grade credit, but ratings agency Standard & Poor's said it would have no immediate impact.
The agency, which has Noble at the lowest investment grade rating of BBB-minus, also said the sale could "weaken Noble's business position, including its business diversity and long-term competitiveness".
Moody's also has Noble on its lowest investment grade rating which is on review for a possible downgrade. Fitch has a stable outlook on its BBB-minus rating for the firm.
The sale also eliminates exposure to an asset-heavy industry, which requires operators to own farms, grain elevators and sugar mills and employ thousands of staff to run them.
In 2014, Noble's agri business, the smallest of its three divisions by revenue and profits, employed about 11,000 people, compared with around 1,900 in the rest of the group, according to its annual report. It also reported operating income of $8.3 million and revenue of $11.8 billion for that year.
The sale is subject to approval from Noble shareholders and the Australian Foreign Investment Review Board. No anti-trust approvals are required, the company said.
Shares in Noble have shed around two-thirds of their value since mid-February when blogger Iceberg Research alleged the company was inflating its assets by billions of dollars by not fairly representing the value of its commodity contracts.
Noble rejected the claims and board-appointed consultant PricewaterhouseCoopers found no wrongdoing in a report published in August.
(Reporting by Josephine Mason in NEW YORK and Umesh Deai in HONG KONG, additional reporting by Niu Shuping and Dominique Patton in BEIJING; Editing by Stephen Coates and Miral Fahmy)