Saudi's SALIC looking for land in Sudan to grow fodder 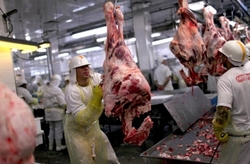 Saudi Agriculture and Livestock Co (SALIC), an arm of the state-owned Public Investment Fund, is looking to buy land in Sudan to grow fodder, after purchasing a 20% stake in a Brazilian beef exporter.
Reuters | 24 December 2015

Saudi's SALIC looking for land in Sudan to grow fodder
Saudi Agriculture and Livestock Co (SALIC), an arm of the state-owned Public Investment Fund, is looking to buy land in Sudan to grow fodder, chief executive Abdullah Aldubaikhi said in an interview on Saudi-owned Al Arabiya TV on Thursday.
He was speaking the day after the company announced it had signed an agreement to buy a 19.95 percent stake in Brazilian beef exporter Minerva Foods SA for $188.4 million.
Saudi has been phasing out growth of crops due to their intense water usage which was depleting reserves in the desert kingdom. A cabinet statement this month said cultivation of green fodder would be stopped in the next three years.
To support this and to maintain food supplies for its young and increasingly affluent population, Saudi Arabia embarked on a programme last year to build agricultural operations abroad.
"The place we are studying seriously is Sudan. It's a great place for growing fodder, due to the availability of water and dry weather," Aldubaikhi was quoted as saying.
"It's considered a strategic place and we are looking for the best opportunities."
SALIC has targeted investments in beef and eight key crops, including wheat, barley, corn and soybeans. The Minerva deal follows its decision in April to team up with U.S. grain trader Bunge Ltd to create G3, which bought 50.1 percent of Canadian grain handler CWB for C$250 million ($180.3 million).
BRAZIL
The plunge in the Brazilian real against the U.S. dollar "came to the advantage of SALIC" when considering the Minerva transaction but talks had begun prior to this, Aldubaikhi said.
"We are still targeting Brazil as it's the most important country when it comes to the production of meat today."
The kingdom lifted a three-year embargo on beef imports from Brazil last month, imposed after a case of atypical mad cow disease, or bovine spongiform encephalopathy (BSE), was diagnosed. Prior to the ban, Saudi had been one of Brazil's most important markets for beef.
SALIC is looking to create a company that distributes meat, and this was among the main reasons behind the Minerva transaction, Aldubaikhi said.
"The movement of meat requires specific care and temperature from its slaughter in Brazil until it reaches the consumer, which is what led us to come to this deal."