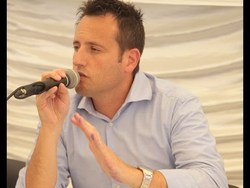 Senhuile Director General, Massimo Castelluci
Ndar Actu | 17 December 2015  [FR]
Freely translated by GRAIN
Senhuile: Director General Massimo Castelluci fired
After being promoted to the position of Director General of Senhuile by the Italians of Tampieri Financial Group, following the dismissal of the Israeli Benyammin Dummai, Massimo Castelluci has been relieved of his post, barely a year after promising wonderful things to the workers and communities of Ndaiel. But what most marked the period during Massimo Castelluci's directorship at Senhuile was the laying off of countless Senegalese workers, the company's implication in several lawsuits and the worsening of relations between the company and the people of Ndiael and non governmental organisations.
While the reasons for his dismissal have not been made public, as was the case when his predecessor was fired, Massimo Castelluci has been removed from his post as Director General of the agrobusiness company Senhuile SA. He did not waste any time packing his bags and leaving Senegal with his family. Mr Castelluci has returned to Italy where his co-workers at Tampieri Financial Group, who rule the roost over 20,000 of land in the special aviary reserve of Ndiael, in the region of Saint Louis, are based.
For the workers of Senhuile and the communities surrounding the land the company took over, Massimo Castelluci will not leave good memories behind. They resent him for having put thousands of children into the street and having taken from them the rare opportunity to find work in this austere part of Senegal.
For those workers left behind at Senhuile, Massimo Castelluci's departure is not a surprise for several reasons. They feel that this man, who joined the company as Financial Director on the request of its previous Director General Benyamin Dummai, shot himself in the foot several times by trying to completely overturn the original management of Senhuile.
The workers point out that more than 200 workers with indefinite contracts were fired and that 2,000 daily labourers who ran the farm were also thrown out. Even before the departure of Massimo Castellusi, a new group of workers was shown the door while those who remained had to accept a steep cut in their salaries.
Alongside these problems, which surely weighed into Massimo Castelluci's departure, Senhuile got embroiled in a multitude of lawsuits such as one against the municipality of Fanaye, for example, or another against the former Director General Benyamin Dummai, who is counter suing the company, not to mention the multiple complaints filed by the laid off workers and Senhuile's attempt to sue a Senegalese media group.