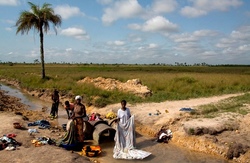 Rapid expansion of large scale land deals in Sierra Leone: The contentions amidst weak land tenure systems
By Bernard Koroma
Introduction
In light of the prevailing rapid and large-scale takeover of farmland in Sierra Leone, where the majority of the population are small scale farmers living in small rural communities, vast areas are possessed by the inhabitants of these communities, which they are at present leasing out to mining companies for mining and mineral exploration.  Apart from leasing to mining companies, these huge land masses are being leased to new economic entrepreneurs in the name of agricultural investment with a high potential to accelerate development. This is made against the background of claims that just 11 to 15 percent of the country’s arable land is being used, and that there are plenty of extra land available for foreign investors to develop. This view contradicts research findings which conclude that, “there is in fact, already pressure for arable land in Sierra Leone and there is no idle productive land that could easily be made available for commercial agriculture under the current patterns of small holder upland cultivation and fallow rotation”.
In view of this, surprisingly, little attention has been paid to the potential risks that this rapid and top down agrarian reform could engender poor food security, rural livelihoods, social cohesion and peace. There has never been much consideration for democratic discussion with the rural masses about real costs and benefits of land deals, the environment and domestic revenue generation.
There is now rapid expansion of large scale land acquisition in a country where people migrating from the rural areas sometimes illegally take over lands from people in the urban areas. One senior civil servant described this land grabbing as allowing vampires and vultures to take our lands forever. Examples of land takeover abound, but for the purpose of this essay, I will state only three:
Sierra Leone Agriculture Limited (SLA), lease of 41,582 hectares, oil palm in Port Loko district;
Addax Bioenergy (SL) Limited, lease of 44,000 hectares, sugar cane for ethanol in Tonkolili and Bombali districts;
Socfin Agricultural Company (SL) Limited (SAC), lease of 16,248.54 acres or 6,500 hectares, oil palm in Pujehun district.