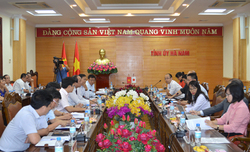 Japanese firms hope to expand investment in Ha Nam, Thai Binh
Thai Binh Provincial People’s Committee Chairman Nguyen Hong Dien speaks at the working session with the Japanese delegation (Source: VNA)
Hanoi (VNA) – A delegation of Japanese agricultural companies led by Atsuke Kawada, Chief of the Japan External Trade Organisation (JETRO)’s office in Hanoi, went on a fact-finding tour to the northern provinces of Ha Nam and Thai Binh on December 8 to seek investment opportunities in the localities.
During their meetings with the delegation, leaders of Ha Nam and Thai Binh affirmed that their localities want to attract more investment from Japanese firms, especially in agriculture – the key to fostering local economic development.
Along with promoting the application of science and advanced technologies, Ha Nam is calling on Japanese firms to boost their investment and support for agriculture development, said Provincial Party Committee Secretary Mai Tien Dung.
The local authorities give incentives for land and building infrastructure, aiming to encourage investment in the locality, he added.
As many as 61 Japanese firms are investing in Ha Nam, including six operating in agriculture. They contribute 22 percent of the province’s total budget, Dung reported.
Japanese and Vietnamese businesses are seeing good results in a project on planting Japanese technology-based organic vegetables in Ly Nhan district.
Meanwhile, Thai Binh Provincial People’s Committee Chairman Nguyen Hong Dien briefed Japanese guests on the locality’s strengths, including rice production, aquaculture and livestock.
Thai Binh is encouraging investment in the development of animal-feed processing plants and large-scale breeding establishments, while boosting joint venture-oriented agricultural production, he stressed.
Through its supportive, transparent policies, the province has committed to ensuring effective operation for enterprises, he affirmed.
Speaking at the sessions, Atsuke Kawada said he appreciated the investment climate in the Vietnamese localities – especially assistance from local authorities for Japanese small- and medium-sized enterprises.
Japanese firms are looking forward to stronger trade promotion activities between the two sides’ businesses, and greater facilitation from the provinces for Japanese firms’ operations.-VNA


Vietnam Investment Review | 29 July 2015
Japanese promote Japonica
The Seibu Nousan Company visited Ha Nam Province yesterday, seeking investment opport-unities for planting, processing and exporting Japonica, a kind of Japanese rice.
The Seibu Nousan Company visited Ha Nam Province yesterday. Photo hanamtv
During a working session, Ha Nam Party Committee Secretary Mai Tien Dung said agriculture was one of the province's key economic development tasks.
In addition to accelerating application of advanced technology in the sector, the province had begun encouraging hi-tech farming investments by Japanese investors, he said.
Dung vowed that the province would offer all possible support to agriculture investors, including assistance with electricity and water supply and transport.
Director of Seibu Nousan Viet Nam, Akira Ichikawa, said his company decided to survey opportunities in the province after finding out its attractive investment policies and favourable conditions for agricultural development.
He hoped that authorities could create the necessary conditions for a test run of Japonica rice on a 20ha area, adding that the pilot would use hi-end technology and a quality management system from Japan.
Currently, potatoes, vegetables, soy beans and pumpkins grown in Ha Nam are popular in the Japanese market.
The locality has already zoned off a 1,000ha riverside plot for more vegetable and fruit cultivation, vietnamplus.vn reports.
—
Vietnam+ | 28 July 2015
Ha Nam draws Japanese investment in agricultural production
The northern province of Ha Nam has offered incentives for Japanese investment in hi-tech local agricultural production, Secretary of the provincial Party Committee Mai Tien Dung has said.
During a reception on July 28 for a group from the Japanese Seibu Nousan Company who are visiting Vietnam to seek investment opportunities in the province, Dung said the locality has focused on improving infrastructure facilities such as roads and electricity and irrigation systems to facilitate Japanese investment.
As many as 56 hectares have been zoned off to grow the high-yield and high quality Japonica rice variety in the province, Dung said, adding that the traditional farming techniques have resulted in low productivity.
He urged the company to introduce advanced technologies in the production process to enhance the productivity and quality of the rice.
Director of Seibu Nousan Vietnam Akira Ichikawa hailed the local agricultural potential and business climate, especially incentives for Japanese investors.
He expressed his wish to grow the rice variety on 20 trial hectares with the application of technology and strict quality management procedures.
The company is also willing to transfer technology to the locality in a bid to raise the quality of local rice for domestic demand and export.
The Seibu Nousan Company, established 30 years ago, has developed 830 hectares of rice and other crops in Japan.
The company opened its branch in Vietnam early this year.-VNA
—
VNA | 3 November 2015
Japanese firm to pilot hi-tech rice farming in Ha Nam
Ha Nam (VNA) - Japan’s Seibu Nousan company held a working session with officials of the northern province of Ha Nam on November 3 to discuss a high-tech rice farming project in the locality.
Mai Tien Dung, Secretary of the provincial Party Committee, said the project is in line with the province’s policy of promoting industrialization in agricultural production.
Director of Seibu Nousan Vietnam Akira Ichikawa hailed the local agricultural potential and business climate, especially incentives for Japanese investors.
He presented the company’s intent to grow the Japonica rice variety on a trial basis on 30-60 hectares of land in the province.
The company is willing to transfer farming techniques to the locality in a bid to raise the quality of local rice for export.
During the working session, the provincial leaders agreed to allocate 50 hectares of land in Hung Cong commune, Binh Luc district to the company for carrying out the project.
Besides, the province also pledged to invest in roads, electricity supply and irrigation system to the trial farming zone.-VNA
—
VNA | 9 September 2015
http://en.vietnamplus.vn/japanese-enterprise-develops-cow-farms-in-can-tho/81385.vnp">Japanese enterprise develops cow farms in Can Tho
A Japanese enterprise met with authorities from the Mekong Delta City of Can Tho on September 8 to discuss developing a cow rearing project in Song Hau plantation.
The Japanese Beef Import-Export Association (J-BIX) is expected to decide the final investment amount upon the completion of their survey in December this year.
Director of the Overseas Markets of the J-BIX Nakashima said the project aims to develop both beef and dairy farms.
It will ensure high-quality and high-yield breeding cows in tandem with clean and healthy feed for the herds.
Technology will be fostered in farming and processing to meet international standards on food safety.
The company will also devise environmentally-friendly and advanced approaches to farm waste treatment while enhancing farming efficiency.
During the meeting, Vice Chairman of the Can Tho People’s Committee Dao Anh Dung urged the Song Hau plantation to work closely with the Japanese firm to implement the project effectively.
The project is expected to create jobs for local residents and contribute to local socio-economic development, Dung said.
In 2014, the city had only around 3,500 cows raised by individuals.-VNA