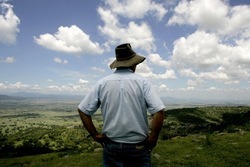 by ANDREW MARSHALL
STRICT foreign investment rules controlling overseas ownership of farmland and agribusinesses are not as tough in Australia as in many countries', but the Business Council of Australia (BCA) says they still confuse and discourage potential investment here.
At a time when agriculture rated as the nation's leading export growth opportunity and badly needed about $1 trillion in new capital, the BCA said Australia was the tenth most restrictive country within the Organisation of Economic Co-operation and Development's (OECD) 32 country membership.
Laws introduced this year changed the thresholds at which foreign buyers need approval to purchase agricultural businesses and land, including a $15 million trigger point for farmland and $55m for agribusinesses.
Foreign investment application fees have also hiked.
The fees alone serve as "a deterrent to investment and may reduce the sector's global competitiveness" according to BCA's agri-food report.
"The government should remove specific Foreign Investment Review Board thresholds for farmland and agribusinesses, and restore therm to the same level as other sectors of the economy," said BCA chief executive Jennifer Westacott, noting less than 10 per cent of Australian farmland was foreign owned.
She wants rural land and business acquisitions subject to the same $252m threshold as other businesses.
Executive member and Coca-Cola Amatil boss Alison Watkins said developing the cash-needy and disjointed agri-food sector was not being made any easier by "chopping and changing the rules and having different rules for investors from different countries".
"We don't send a predictable signal to help our situation," she said.
"Rather than argue other countries are worse than us, lets make the most of the reality that agriculture is a huge export growth sector and promote it with a stable policy environment which makes us preferred choice of outside investors.
"There are plenty of other competitors offering themselves as alternatives to us if we don't act."
Ms Westacott said governments needed to have a deeper understanding of the combined food and agricultural sector, including government regulatory bodies such as the FIRB, the Australian Competition and Consumer Commission and planning authorities.
She said a 22-month wait for planning approval for a typical food company expansion project was typical of what "sends investors into a spin".
"We still need checks and balances, but surely if land is zoned for development it doesn't need to be subject to the sort of delays and costs businesses are currently risking, especially when there's so much infrastructure efficiency which needs to be developed," said Murray Goulburn's Gary Helou.
BCA also wants more free trade deals and follow-up strategies to break down other trade barriers such as overseas labelling and quarantine restrictions, plus more government effort in helping organisations like Austrade co-ordinate efficient branding initiatives.