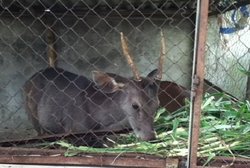 Investors hunt for farmland to make quick profits
A businessman in the real estate sector in HCM City said he bought 5 hectares of land in Binh Duong province near the Vietnam-Singapore Industrial Zone and 10 hectares of land in Quang Nam, planning to grow medicinal herbs there.
The businessman said the land in Binh Duong was more expensive, VND10 billion per hectare, while it was cheaper in Quang Nam, just VND300 million.
If counting the expenses on the glass greenhouse and technical system installation, estimated at VND8 billion, the total initial cost is VND60 billion. He also has to pay for seeds and some other kinds of expenses.
“The initial investment rate is relatively high. However, I think I will still make a profit because the farmland can bring double profit: I can earn money from cultivation now and I hope the land price will increase in the future,” he explained.
Many urban investors think the same way as the businessman. Land plots in the areas in the suburbs of HCM City such as Cu Chi and Hoc Mon districts, and near HCM City such as Binh Duong and Dong Nai, have been eyed by big investors.
Tran Khanh Quang, director of Viet An Hoa, a consultancy firm, said the investment wave began one decade ago, but it has become a growing trend recently.
Truc, the owner of a business in HCM City, bought 6 hectares of land in Cu Chi district near an overpass for farming. He has been growing watermelons and vegetables on an area of one hectare, while the remaining land fund has been reserved for other development plans.
In 2012, when Truc bought the land plot, one hectare of land cost VND2 billion only. He spent VND500 million to build a glass greenhouse on every hectare to grow vegetables. Now he can earn VND800 million a year from 1,000 square meters of greenhouse.
However, according to Truc, the amount of money is not the only source of income from the land. The land price has increased sharply in the last three years to VND3-4 billion per hectare.
Hoang Anh Tuan, director of Tac Dat Tac Vang Real Estate Company, noted that injecting money into farmland has become a popular investment mode.
Farmland is very cheap, but the land value will increase sharply after it is upgraded.
He estimated that the land value may be 2-3 times higher than the initial value after five to 10 years if investors apply a high-technology cultivation model and have a stable income from cultivation.