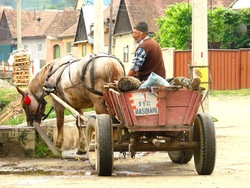 Since 2002, the price of land in Romania has seen a 25-fold increase, and Rabo Farm believe it will continue to grow – albeit at a slightly slower rate. (Photo: Adam Jones)
EU Observer | 12 November 2015

By LUKE DALE-HARRIS AND SORIN SEMENIUC
Mircea Necrilescu has a story to tell, but he won’t talk at his house, at his local bar, or anywhere else in Zarand, the Romanian village where he has lived all his life. Instead, he gets in his car and drives, and only when the village is minute in his wing mirrors does he begin to speak.