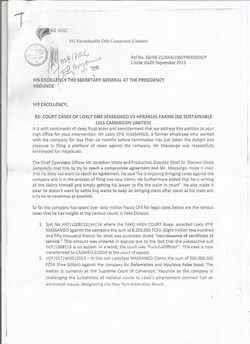 
Shock waves are running down the spine of judges and lawyers in Limbe and Buea following a leak of a letter written by Herakles Farms to the Presidency requesting that it intervene in pending Court Cases against the company.
The Cameron Journal exclusively obtained a copy of the petition addressed to the Secretary General at the Presidency from Herakles Farms, trying to influence the outcome of a number of court cases against the company in Limbe and Buea courts, including one at the Supreme Court of Cameroon.
The letter, signed by Jonathan Watts, the company’s Chief Operations Manager and delivered at the Presidency on October 3rd, asks gov’t to intervene in lawsuits pending legal procedure – something Herakles will not do in the America legal system.
The appeal to the presidency cries foul, the many lawsuits against the company filed by one of its former employees, Loxy Massango Epie. The letter states that Loxy’s lawsuits are making investors of Herakles Farms very worried as millions have already been squandered in such court cases.
“It is with sentiments of deep frustrations and bewilderment that we address this petition to your high office for intervention. Mr. Loxy Epie Massango, a former employee who worked with the company for less than six months before termination has just taken the delight and pleasure in filing a plethora of cases against the company. Mr. Massango was respectfully terminated for ineptitude.” The petition reads in part.
In the entreaty, Herakles laments that “so far the company has spent over sixty million francs cfa for legal cases.”
Enumerating the plethora of lawsuits filed by Loxy that they want gov’t to dismiss, Herakles Farms writes: “Your Excellency, the Company has expended colossal sums of money, in defending herself in the Law Courts. Top Executives of the Company are spending business time in the Law Courts. The cumulative effect is that the business of the company has suffered significantly.”
Herakles states categorically that they want the “Government to intervene in stopping these cases” so that the company can focus on planting and producing Palm Oil.
“Our plea is that the judicial authorities should instruct their subordinates to enforce the arbitration clause on page 4 of his contract of engagement (employment assignment letter) with Herakles Farms (SG SOC LTD).”
“Most of all as mentioned above,” the petition states, “the new investors are not comfortable with this situation and they are not willing to continue incurring these alarming costs and time wasting. The main focus of the new investors is clearing the lands, planting palms and producing palm oil.”
The scandalous revelation first came to the limelight in the oral application of Barrister Emmanuel Nkea in an address to Justice Tatsi Theophilus of the Court of First Instance Limbe, on Wednesday November 4. As the lawyer for Loxy, Nkea had requested the trial judge to take notice of the extra-judicial methods now being adopted by Herakles Farms to evade justice.
Loxy Massango is prosecuting the Herakles Farms for Criminal Defamation and has attached a civil claim of XAF 2 Billion.
By asking the Presidency of Cameroon to cause judicial hierarchy to instruct their subordinates to implement a particular clause in a contract of employment, Herakles Farms appears to be directly asking the Presidency to interfere in a matter that is sub-judice with a view to influencing its outcome.
Whether this act of seeking political interference in judicial processes constitutes an official American government position with regards to cases in Cameroon and Africa, or whether this is an isolated case of judicial meddling, is yet to be determined. But what is certain is that, this letter shows the extent to which powerful foreign companies with access to the Presidency would go to undermine the judiciary process in Cameroon.
It is also certain that if this process goes through, this same company would turn around and provide damning information to qualify Cameroon as one country where judicial independence is far fetched. Can Herakles Farms do this in America?
Local and international NGOs have for long criticized the American company of “developing a large oil palm plantation in Cameroon, with questions over its legality and environmental policies.