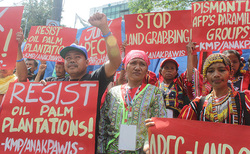 Farmers and indigenous people from Mindanao, Bohol and Palawan thumbed down the government’s plan to devote eight million hectares of land for oil palm by 2023.
Note: the article based on the recently concluded People's Street Conference Resisting Land Grabbing and Corporate Oil Palm Plantations in the Philippines which was held on November 4, 2015 in front of the national office of the Department of Environment and Natural Resources in Quezon City, Philippines.
The street conference was led by the Kilusang Magbubukid ng Pilipinas or Peasant Movement of the Philippines - KMP) in partnership with the Rural Missionaries of the Philippines-Northern Mindanao Region (RMP-NMR) and Unyon ng Manggagawa sa Agrikultura (UMA). It aims to: (1) Expose and oppose the government’s Philippine Roadmap on the Palm Oil Industry and its impending impact on farmers and indigenous peoples; (2) Oppose land grabbing, land use conversion of agricultural and ancestral lands; (3) Consolidate affected sectors and forge a broader unity towards a national campaign against oil palm plantations and its expansion in the country; and (4) Express solidarity with farmers and peoples organizations abroad resisting corporate oil palm plantations.

Manila – About a hundred farmers and indigenous peoples voiced out their opposition to the expansion of oil palm plantations in the country.

In a conference held Nov. 4 at a makeshift tent set up in front of the Department of Environment and Natural Resources (DENR), the farmers and indigenous people from Mindanao, Bohol and Palawan thumbed down the government’s plan to devote eight million hectares of land for oil palm by 2023.

Oil palm plantations in the Philippines cover almost 55,000 hectares. The Philippine Coconut Authority’s (PCA) 2014 to 2023 road map has identified about a million hectares of potential oil palm farms. Ninety eight percent of these areas are in Mindanao.

Erlene Namatidong, 32, a farmer from Kalabugao, Impasugong, Bukidnon does not think oil palm plantations could bring progress to the people of Mindanao.

Namatidong’s husband has been working at A. Brown Energy Resources Development, Inc. (Aberdi) oil palm plantation in Impasugong for nine years. He earns P290 (US$6.20) for a day’s work but could only work for 15 days in one month. Namatidong said that if this continues, they would no longer be able to send their three children to school.

“Since he worked at the plantation, our life has become difficult,” Namatidong told Bulatlat.com in an interview.

Namatidong joined this year’s Manilakbayan to call on the government to stop the expansion of oil palm plantations.

Ariel Casilao, vice president of Anakpawis Partylist and co-convenor of the Manilakbayan 2015 said the impending drastic expansion of oil palm plantations in the country in the next few years would displace thousands of farmers and Lumad.

In Opol, Misamis Oriental, hundreds of Higaonon were driven away from their ancestral land by Aberdi’s oil palm plantation. One of their leaders, Gilbert Paborada, was gunned down on Oct. 3, 2012.

In Palawan, the expansion of oil palm plantation threatens the Pala’wan tribe. 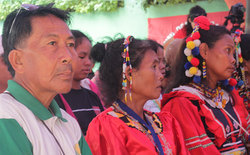 Fermin Queron, 59, said that Agumil Philippines, Inc. converted agricultural lands into oil palm plantation. Queron, a native of Sofronio Española town, said the company just came to their community and did not bother to get their free, prior and informed consent (FPIC).

Queron said many of his tribesmen who were deceived by Agumil either sold or rented out their land. A one-year lease amounted to P1,000 per hectare, he said. The cost of land sold ranges from P7,000 per hectare up to P30,000 per hectare.

Queron added that most of the land in Sofronio Española is covered by agrarian reform. He said farmers and indigenous peoples “surrendered” their certificate of land ownership award (CLOA) to the company.

Queron has kept his land planted mostly to rice and coconut. Since the entry of oil palm, however, he noticed how his produce decreased. Before, his family could produce 50 to 70 sacks of rice per hectare. Nowadays, they are lucky if the yield reaches 20 sacks. A sack contains 60 kilos of rice.

Their copra production dwindled, too. In the past, their two-hectare farm could yield 1,500 kilos of copra. These days, they could only get 700 kilos.

Four of Queron’s six children are also dependent on farming. He has 11 grandchildren.

Nine companies from Malaysia and Indonesia, the two biggest oil palm producers and exporters in the world, have signaled their intention to invest in Mindanao. Among these companies are Felda Global Ventures, New Britain Palm Oil Ltd.-PNG, Pertamina-Indonesia, Perkebunan Nusantara-Indonesia, and Bali Palm Oil-Indonesia.

Aside from cooking, palm oil is also widely used in the food, drug, cosmetics and agro-chemical industries. It is also processed as bio-fuel.

Mariano slammed the DENR for “pimping agricultural and ancestral lands to oil palm plantations and mills under the guise of reforestration.”

Citing a 2012 study by the Center for Trade Union and Human Rights (CTUHR), poverty, Casilao said 24 percent of plantation workers in Agusan del Sur are children between five to 17 years old.

“Mindanao is not for sale,” Casilao said. “We are ready to offer even our blood to protect Mindanao.”