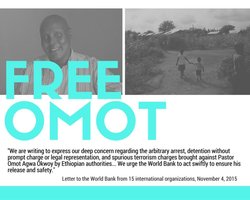 ASO et al | 4 November 2015
Letter to World Bank President re arrest and prosecution of Pastor Omot Agwa in Ethiopia
November 4, 2015
Dr. Jim Yong Kim
President
World Bank Group
1818 H Street NW
Washington, DC USA 20433
Re: Inspection Panel Translator Charged With Terrorism
(Download this letter as a PDF)
Dear President Kim,
We are writing to express our deep concern regarding the arbitrary arrest, detention without prompt charge or legal representation, and eventual spurious terrorism charges brought against Pastor Omot Agwa Okwoy by Ethiopian authorities. He is now facing charges that could entail between 20 years and life in prison. The next court hearing is scheduled for November 5, 2015.
As you know, Pastor Omot worked as a translator and assistant for the World Bank Inspection Panel during its 2014 investigation visit to Ethiopia’s Gambella region. He was taken into custody in March  shortly after the Inspection Panel publicly released its investigation report. Prior to his arrest, he expressed concern to trusted colleagues that he was under increasing pressure from security officials due to his role in the World Bank investigation. We have little doubt that Pastor Omot’s arrest and prosecution are a reprisal for his role in assisting the World Bank in ensuring accountability for the projects it finances.
As the leader of this public institution, we believe you have an obligation to take action, including by speaking out, to secure Pastor Omot’s prompt and unconditional release.
Pastor Omot was arrested at the Addis Ababa airport on March 15, 2015 along with six others while en route to a workshop on food security in Nairobi, Kenya. Three were released without charge on April 24 and a fourth on June 26. Pastor Omot, Ashinie Astin, and Jamal Oumar Hojele were held without charge or access to legal representation for nearly six months at Maekelawi police station, where Omot’s and Jamal’s health deteriorated. During their detention, Jamal was admitted to a military hospital for two weeks and Pastor Omot was placed in solitary confinement for three weeks. On September 7, the three detainees were charged under Ethiopia’s abusive anti-terrorism law and transferred to Kalinto Prison.
The charge sheet accuses Pastor Omot of being a co-founder and active member of the Gambella People’s Liberation Movement (GPLM) and communicating with its leaders abroad. However, Pastor Omot—a leader of the evangelical Mekane Yesus church—has no ties to the GPLM and there is no evidence linking him to the organization. Further, though he is charged with terrorism under Ethiopian law, the GPLM is not among the five organizations that the Ethiopian parliament has designated as terrorist groups, nor is the GPLM considered a terrorist group by any international body.
The charges also refer to the food security workshop in Nairobi—organized by the international organization Anywaa Survival Organization (ASO) with support from GRAIN and Bread for All—as a “terrorist group meeting.” ASO is a London-based registered charity that promotes indigenous rights in southwest Ethiopia; Bread for All is the Development Service of the Protestant Churches in Switzerland; and GRAIN is a small international non-profit organization based in Spain that received the 2011 Right Livelihood Award at the Swedish Parliament for its “worldwide work to protect the livelihoods and rights of farming communities.”
The objective of the Nairobi workshop was to exchange “experience and information among different indigenous communities from Ethiopia and experts from international groups around food security challenges.” Participants from Ethiopia were selected by ASO based on their experience in supporting local communities to ensure their food security and access to land. There is nothing to suggest that any of these organizations, individuals, or the Nairobi workshop have any links to the GPLM or terrorist activities. Rather, it appears that the charges were fabricated by Ethiopian authorities in order to intimidate and silence the country’s indigenous communities and their advocates.
Ashinie Astin is an indigenous Majang from the Gambella region who has worked to promote the rights of forest-dwelling communities. As an elected member of Gambella regional council (2010-2015), he worked to limit the impact of government policies that facilitate environmental degradation and undermine the food security of ethnic minorities. Jamal Oumar Hojele is an ethnic minority from the Benishangul-Gumuz region and works for the non-governmental organization Assosa Environmental Protection Association campaigning on environmental protection and the rights of indigenous peoples in the region.
Since 2011, Ethiopia’s anti-terrorism law has been used to prosecute journalists and bloggers, opposition politicians, and peaceful protesters. Many have been accused without compelling evidence of association with banned opposition groups. In August 2015, 18 leaders of protests by members of Ethiopia’s Muslim community were convicted and sentenced to between 7 and 22 years in prison. In October 2015, four Ethiopian bloggers (part of a group known as the Zone 9 bloggers) who were arrested in 2014 after writing posts critical of the government, were acquitted of terrorism charges—but this came after 539 days in prison and 39 court hearings.
We urge you to act swiftly to ensure the release and safety of Pastor Omot and his fellow detainees, as the Bank’s continued silence on this issue undermines its system of accountability, in which Omot played an instrumental role.
We look forward to your response.
Sincerely,
Bernard DuPasquier
Managing Director
Brot für alle/Bread for All
Obang Jobi
Representative
Inspection Panel Requestors from Gorom Refugee Camp
Natalie Bridgeman Fields, Esq.
Founder & Executive Director
Accountability Counsel
Chad Dobson
Executive Director
Bank Information Center
Mark Fodor
Executive Director
CEE Bankwatch
Kristen Genovese
Senior Researcher
Centre for Research on Multinational Corporations (SOMO)
Henk Hobbelink
Director
GRAIN
Roman Herre
Agrarreferent
FIAN
Korinna Horta, PhD
Director IFI program
Urgeweld
Leslie Lefkow
Deputy Director
Africa Division
Human Rights Watch
Jocelyn Soto Medallo
People, Land, and Resources Program
Center for International Environmental Law (CIEL)
Anuradha Mittal
Executive Director
The Oakland Institute
Edmond M. Owor
Executive Director
Uganda Land Alliance
Josh Klemm
Policy Analyst
International Rivers
David Pred
Managing Director
Inclusive Development International