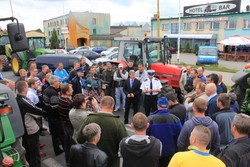 URGENT! The Polish farmers are calling for other farming and consumer groups in Europe and beyond to show solidarity with their actions. As one farmer said "To day we are arrested - tomorrow you could be."

Please do send letters of support!

On 6th October 2015 the police arrested 11 farmers from Pyrzyce (Western Pomerania Province) where 60% of farmland has already been sold off to foreign buyers. The arrested farmers are accused of participating in an organized group whose aim is to prevent the actioning of tenders for the sale of Polish farmland by WRSP (land owned by the state). The farmers were arrested on their own farms and handcuffed with their families watching.

The prosecutor stated that "they will all have to answer for impeding the tenders for the sale of land... The farmers are blocking a dozen tenders connected with the foreign sale of farming estates worth at least 6 million zloty."

The arrested farmers had actively participated in protests in Szczecin and the surrounding region as well as Warsaw, their aim is to introduce changes into the law applicable to farmland management and to put a stop to Polish land sale transactions to speculative foreigners and corporations.

"These changes would stop the out-of-control and reckless sale of Polish farmland which is causing economic and social degradation of the countryside and the building of colonial relations in these territories..." - said Edward Kosmal - the leader of the KPRWZ (Western Pomerania Farmers Protesting Committee).

Two days after the farmers were arrested (8th October) five of them were sentenced to two months of provisional detention. Others were released on bail with the financial guarantees of 30 to 60 thousand zloty. The farmers could be sentenced to five years imprisonment.

"Is this an attempt to intimidate other farmers participating in protests? A revenge for fighting with companies with foreign capital that want to buy-up Polish farmland? - asked Sir Julian Rose, the President of ICPPC.

"The farmers blocked tenders connected with the sale of Polish farmland in which foreign companies participated (for example, Danish companies and their agents). They also sowed the land which was supposed to be grabbed by foreign capital with their own grains and kept watch on the area, thus blocking other entities from entering. Their protest is against the sale of Polish land into foreign hands instead of to aspiring young Polish farmers." - commented Jadwiga Lopata, vice president of ICPPC.

The farmers from the Western Pomerania Province are outraged and are demanding that the arrested farmers should immediately be released from custody. They have announced a large scale protest in front of the Prosecutor's Office in Szczecin on Monday (12th October). 100 tractors will participate in this action.
International Coalition to Protect the Polish Countryside-ICPPC is fully supporting the farmers' actions!

URGENT! The Polish farmers are calling for other farming and consumer groups in Europe and beyond to show solidarity with their actions. As one farmer said "To day we are arrested - tomorrow you could be."

This includes TTIP attempts to prevent the sovereign protection of internal food chains.

Please do send letters of support to the farmers - through us - and we will forward them to the Polish Prime Minister Ewa Kopasz and other ministers as well as to the prosecutor.

You can donate to ICPPC's activities here
http://icppc.pl/index.php/en/support-us.html
Many thanks!