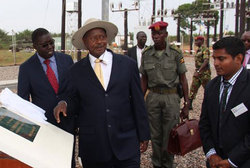 Kalangala- President Museveni has vowed to punish people who are hiding under politics to frustrate projects meant to benefit poor Ugandans.

“I wanted bullets to kill those bad-hearted people because they do not care about the local people. Oil palm is used to produce soap. Are they suggesting that we all stop bathing?” he asked

The President was speaking to residents of Kalangala at Kibanga Primary School playground in Kalangala Town Council after the launch of projects under the Kalangala Infrastructure Services (KIS) at the weekend .

“We used to get oil for soap-making from Malaysia. Little did we know that we could grow oil palm here in Uganda. But the bad-hearted are not happy with such development. They want us to import oil palm for soap making,” said the President.
The palm oil project in the Kalangala District is being carried out by Bidco Uganda.

However, some politicians and conservationists have been opposed to this project, saying it is done at the cost of the environment since many forests have been cut down to pave way for oil palm growing and many small holder farmers were also left landless.

However, State minister for Agriculture Vincent Ssempijja, who was also present at the function, said none of the government forest reserves were cut down for the project.