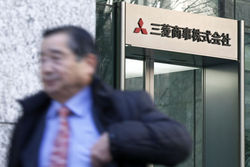 By Anshuman Daga and Saeed Azhar

Japanese trading house Mitsubishi Corp (8058.T) will buy a stake of at least 10 percent in agri-trader Olam International Ltd (OLAM.SI) in a deal worth $500 million or more, people familiar with the matter said.

Reuters earlier reported that the Singapore-based firm was set to announce a strategic partnership with a Japanese peer, after Olam, majority-controlled by state investor Temasek Holdings [TEM.UL], halted trading of its stock on Thursday.

One of the sources said Mitsubishi had done extensive due diligence and had also looked at other strategic investments before choosing Olam. The people declined to be identified as discussions were private.

Olam, in which Temasek holds a 58 percent stake, will sell new shares to Mitsubishi as part of the transaction, in which Temasek's stake will be diluted. Olam's founding family will also cut its stake in the company, the source said.

In a stock exchange filing on Thursday, Olam requested a trading halt pending an announcement. A Mitsubishi Corp official had no immediate comment and Temasek declined to comment.

Olam processes and sells foods such as nuts and spices, as well as raw materials such as cotton and rubber.

The people said Olam had held talks with Mitsubishi Corp and Mitsui & Co Ltd (8031.T) to form a joint venture and use the Japanese firms' global reach. The talks included one of the Japanese firms investing in Olam, they said.

Olam, with a stock market value of $3 billion, has since sold stakes in more than a dozen operations, including in grains and dairy, to cut debt, boost cash flow and generate profits.

The people said an announcement on the partnership could come as early as Thursday.

Olam's shares were 13 percent higher before the halt, on track for their biggest single-day percentage gain in more than six years. The broader market .FTSTI rose 2.5 percent.

Japan's Mitsubishi Corporation has bought a 20 per cent stake in global-agri business Olam through two transactions as the companies launch a strategic partnership.

Singapore-listed Olam sold 332.73m new shares — the equivalent of 12 per cent of the enlarged issue — to Mitsubishi for S$915m, the company said in a statement, David Sheppard writes in London.

In a separate transaction Mitsubishi has bought the equivalent of further 8 per cent from the co-founding family of the company, the chief executive of Olam told the Financial Times.

"We think this will be a significant transaction that will allow both companies to take a bigger share of the Japanese market," Olam chief executive Sunny Verghese said in a telephone interview.

"This deal allows us to raise capital and supports our strategic growth plan."

Singapore's sovereign wealth fund Temasek Holding retains a majority stakeholding of 51.4 per cent in Olam. While it has sold no shares, its position has been diluted from 58.4 per cent by the issuance of the new shares.

Mitsubishi Corporation will nominate up to two members to Olam's board as part of the deal. It had originally requested to buy 20 per cent of the company outright but the structure of this deal avoids greater dilution of existing shareholders, Mr Verghese said.

"This transaction sets a strong platform for a long term strategic partnership between Olam and Mitsubishi Corporation, with several mutually beneficial potential collaboration opportunities, including the setting up of a proposed joint venture in Japan to market specific products.

Mr Verghese said the two companies were also looking at expanding in Africa together, and that the S$915m gave Olam some "dry powder" to potentially make acquisitions during the current commodity slump.