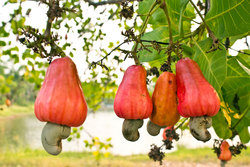 A cashew nut processing unit may be installed in the Nhamatanda district of Sofala province in the next few years, reports the Maputo daily Notícias, citing the managing partner of the Beira-Boi company.

Américo Sebastião said that the Beira-Boi project, whose main activity originally involved beef cattle, became interested in cashew planting about three years ago, at the time occupying an area of 30 hectares.

Due to the results obtained, the company decided to expand the area to 120 hectares, where it planted 18,000 trees.

The final goal is to occupy an area of 500 hectares, ensuring a supply of raw material to feed a cashew nut processing facility which should eventually be installed in that district of Sofala province, Sebastião said.

The cashew trees planted three years ago are already bearing fruit. The company hopes to attain production of 500 to 800 tons of cashews so it can begin planning construction of the processing unit.

The Beira-Boi project began eight years ago and currently possesses 2,100 head o cattle, of which 20 are slaughtered every month. The meat is mainly sold in the city of Beira. (Macauhub/MZ)