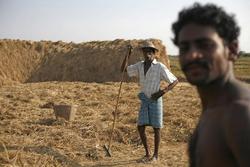 Farmers work in their field in the Thilawa economic zone in Burma on January 6, 2013. (Photo: Reuters)
Human Rights Watch | 15 August 2015

At about midnight on August 7, 2015, police arrested U Saw Maung Gyi, a leader of the 88 Karen Generation Student Organization. The authorities charged him under section 17(1) of the Unlawful Associations Act for allegedly providing assistance to a man that police claim is a Karen insurgent. U Saw Maung Gyi faces a two-to-three-year prison sentence if convicted. To further harass the 88 Karen Generation Student Organization, on that same night the police arrested nine farmers and activists who were sleeping at the organization’s office and fined them for staying overnight outside their home district without government permission.

“The Burmese authorities’ repeated use of oppressive laws against land rights activists is a heavy-handed attempt to silence them,” said Phil Robertson, deputy Asia director at Human Rights Watch. “These activists are forced to run a gauntlet of government intimidation, arrests – and now, trumped-up charges – just to try and help villagers stay on their land.”

The 88 Karen Generation Student Organization is one of the main groups in Burma’s eastern Karen State assisting small farmers to peacefully resist land confiscations, which often involve powerful government officials and members of parliament, crony businessmen, and armed groups. Very few organizations are currently providing such assistance to villagers in Karen State, in part because of government oppression.

The arrests of these activists follows the arrests of 27 people in June in Karen State for allegedly violating section 43(a) of the Forest Law after they erected huts on land they claimed to own. They face up to seven years in prison. In addition, another 13 people from Karen State are facing charges under section 18 of the Peaceful Assembly and Peaceful Procession Law after a protest in Hpa-an in March. Several of those charged for their involvement in that protest told Human Rights Watch that the protest sought the return of their confiscated land and was peaceful. Both groups face trial on August 17.

Land rights disputes have dramatically increased since 2011, becoming a major nationwide issue. Increased protests have resulted in a marked increase in the arrest and prosecution of protesters and activists. Most recently, on July 23, police in Pegu Region arrested and charged the prominent former political prisoner and current head of the Myanmar Farmers Association, Su Su Nway, with trespass for her investigations into farmland seized by the Burmese military several years ago. Her trial began on July 29 and she could face three months in prison.

The number of political prisoners in Burma has surged in the past year, with approximately 170 people in prison and over 400 facing various charges. These include large numbers of farmers and land rights activists charged with either trespass or unlawful assembly.