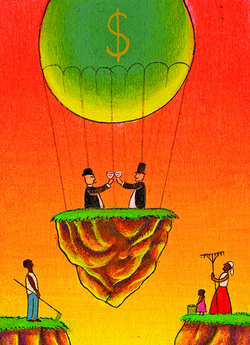 Land grabbing is the new colonization, and developing countries are again being strong-armed out of their natural resources. (Illustration: Stefano Vitale)
World Ark | Fall 2015

As climate change, population growth and environmental damage shrink the amount of arable land on the planet, wealthier countries and corporations look to developing countries for land.

On a morning four years ago, families in an Ethiopian community woke to the sound of a bulldozer leveling their farms and demolishing their crops. There had been no warning. The rumble of heavy machinery rolling in was the residents’ first clue that the Ethiopian government had earmarked their land for an ambitious agricultural development funded by a foreign business planning to grow food for export. Community members soon learned they lost their homes and farms to a company that leased 25,000 acres of farmland from the Ethiopian government to grow rice for Saudi Arabia.

The people who lived on the seized land had been there for decades or even centuries, but lacked formal titles or other legal claims. Displaced by the rice-growing mega-farm, these people would be rehomed through villagization, or resettlement into areas designated by the government. The Saudi Star, as the project is called, is an example of a new class of international agribusiness investments that claim vast tracts of land and natural resources all over the world.

Critics of these land grabs, as they’re commonly called, say this new phenomenon isn’t actually new at all, but simply a fresh spin on the colonial model. Much as Belgium laid claim to the Congo and its wealth of rubber trees in the early 1900s, or as France occupied Haiti and filled it with sugar plantations in the 1700s, corporations and national governments again see great opportunities in the agricultural lands and natural resources of nations not their own, and small-scale farmers like those in Ethiopia again face the possibility of losing their lands and resources for someone else’s gain.

The difference now is the recognition that this kind of project violates core human rights principles, giving rise to the term “land grabs” to describe the process by which a corporation, institution or nation is allowed to use land and resources it doesn’t own for its own purposes. In exchange they often promise abundant, good-paying jobs, medical clinics, schools, and infrastructure to the host regions — promises that are not always kept, according to watchdog groups like the Oakland Institute.

The Oakland Institute began tracking these large-scale agricultural investments following the food crisis in 2007 and 2008 when food costs spiked around the world. They found that one contributor to this painful period was these kinds of agricultural investments that take people off their land to grow crops for export. These large farms employ far fewer people than could make a living on multiple smaller farms on the same total acreage. Looking more deeply, the director of Oakland Institute, Anuradha Mittal, and her colleagues found many such projects being proposed as a new development paradigm at high-rolling investor conferences like the annual Land Investment Expo, which was keynoted by Donald Trump this year. Mittal found that such projects are happening mostly in Africa, although they also happen in South America and Asia.

Further, Mittal and her colleagues were surprised to see that these land grabs were really catching on. Since 2008, the institute reports the equivalent of an area nearly the size of France has come under control of private interests. Information about land grabs is difficult to find, and is often riddled with myths and half-truths, Mittal said. One misconception she speaks of often is the belief that land grabs affect only unpopulated regions and underused land. Rather, she said, “They’re happening in some of the most fertile areas, close to markets and water, where smallholder farmers and pastoralists who have traditional rights or community rights to those resources are evicted.”

Another common misconception is that land grabs are only about farmland. Often, Mittal said, access to resources like rivers and forests changes hands, too. When forests are cleared and their lumber sold to make way for a palm oil plantation, for example, a community’s source of medicine, food, building material and cultural sites is lost. And river water diverted for thirsty plantation crops is no longer available to farms, communities and ecosystems downstream.

It’s also important to remember, Mittal said, that peoples’ ties to their land are strong, whether or not they hold official title documents. As a tribal chief in Ethiopia recently expressed to her, “‘This is where my mother is buried, and I’ll never move from here.’ It’s a story we hear everywhere, people are very clear that this is where they were born, and this is where they will die. Their relationship with land is so different; it’s not just a means of livelihood or source of food and survival.”

So what are the benefits of land grabs? That’s a question Mittal hears a lot. In her opinion, there’s nothing good about them. “Eventually the local communities lose out, and the national economies lose, too, due to the incentives offered to the investors. According to the U.N. Food and Agriculture Organization (FAO), five acres can support a family of five in Africa,” Mittal said. When large-scale farms come in, the number of people hired to work on the farms is smaller than the number of farmers displaced, creating a net loss of livelihoods.

Another drawback: land grabs can turn violent, as happened with the Saudi Star project. Resentment among the displaced people boiled over into violence, and Ethiopia’s security forces cracked down on the dissent by arresting and jailing protesters. The institute investigated another land grab in Ethiopia that had fatal results in its 2014 report, Engineering Ethnic Conflict. Between 30 and 50 people were killed in a conflict over a proposed palm oil plantation, “which last year closed down because investors were unhappy with the quality of the land,” Mittal said. It took the government many years to admit that the killings happened, all too late. “So people’s lives were disrupted, displaced and ended, and the investor just picked up and moved,” Mittal said.

Despite these negatives, the land grab phenomenon isn’t going away, and African countries continue to find their land in high demand. Mittal warns that, “land grabs will take them more than 10 steps back. Everything that we’re talking about, from sustainable development goals to climate justice, one thing that undoes it all is land grabs. I would say that the biggest threat to a program like Heifer’s is this model of agricultural investments. They can completely undo it all.”

Land grabbing is the new colonization, she says, and developing countries are again being strong-armed out of their natural resources. This is why Mittal vows to continue “dragging the Draculas of land grabs into the sunlight,” as she likes to describe the Oakland Institute’s work on the issue.

To track where land grabs are happening, visit www.oaklandinstitute.org and www.farmlandgrab.org.