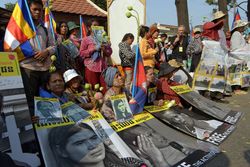 Cambodia’s Ministry of Land Management is acting in accordance with the country’s laws and making an effort to respect citizens’ rights, a ministry official said Tuesday, rejecting comments by a U.S. congressman that people in the Southeast Asian country are denied basic protection from land grabs.

U.S. Representative Ed Royce (R-CA), chairman of the House Foreign Affairs Committee, issued a press release on August 12, announcing a hearing in California on property rights in Cambodia and the Philippines, where citizens “are still denied basic protections under the law” when it comes to “the right to secure property, raise capital and freely participate in the economy.”

Seng Loth, deputy general director of the ministry’s administration department, refuted Royce’s assertion, saying Cambodia’s constitution has guaranteed citizens’ such rights under the 2001 Land Law, which has many sections and subsections on land ownership and land ownership registration.

The ministry has registered many people for legal land ownership, he said.

“So far, we’ve provided land titles for 4 million plots of land among 7 million plots that we must register for land ownership,” he told RFA’s Khmer Service. “We are doing it systematically from the grassroots level.”

Royce’s press release about the hearing suggested that land issues in Cambodia and the Philippines have slowed down the development of the countries, which the U.S. has sought to promote.

“This field hearing will seek to address these continuing concerns by hearing from witnesses who have long studied how land grabbing has significantly impacted the lives of Filipinos and Cambodians, as well as U.S. officials charged with promoting development in these important countries,” it said.

U.S. Representative Matt Salmon (R-AZ), chairman of the Asia and Pacific Subcommittee, said the hearing was being convened to explore land tenure, property rights and the rule of law in Southeast Asia.

“In order to better serve our citizens and protect their rights abroad, I look forward to hearing from our administration and private panel for their perspectives on how we can best work with governments in Southeast Asia to improve rule of law, accountability, and transparency," he said in the press release.

Those who try to resolve such disputes continue to encounter many obstacles such as corruption and political interference, while government officials and wealthy people enjoy high levels of impunity, the report said.

“Adhoc’s numbers are too high, and this has strongly affected the effort of Ministry of Land Management and our country’s honor,” Seng Loth said, adding that the ministry was currently working on 800 land dispute cases.

Latt Ky, Adhoc’s land officer, said the report was based on accurate information, and that the group was seeking fair solutions and justice for the victims of land grabs.

The seizure of land for development—often without due process or fair compensation for displaced residents—has been a major cause of protest in Cambodia and other authoritarian Asian countries, including China and Myanmar.