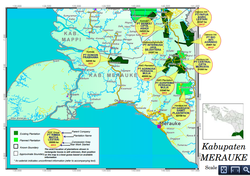 A map from the West Papua Oil Palm Atlas, a report by the Pusaka Foundation, awas MIFEE and six other organizations, shows oil palm concessions in Merauke. The asterisk next to Daewoo International’s name atop “PT Papua Agro Lestari” indicates that while the authors were uncertain of PAL’s ownership, local people said the company had the same management as Bio Inti Agrindo, which is owned by Daewoo. Image: West Papua Oil Palm Atlas
Norway’s wealth fund expels POSCO, Daewoo Int’l over palm oil holdings

Norway’s central bank is divesting the country’s $870 billion pension fund of its holdings in four Asian multinationals over rainforest destruction for palm oil in Southeast Asia, the bank announced yesterday.

Two of the companies, steelmaker POSCO and its subsidiary Daewoo International Corp., are headquartered in South Korea. The others, Genting Bhd. and IJM Corp. Bhd., are Malaysian conglomerates.

POSCO and Daewoo International were excluded for the activities of a subsidiary in Merauke, a district of Indonesia’s Papua province, where the central government intends to revive a controversial megaproject, the Merauke Integrated Food and Energy Estate (MIFEE).

The Korean firms take the bigger hit: at the end of 2014, Norway’s fund held a 0.91 percent stake in POSCO worth $198 million and a 0.28 percent stake in Daewoo International worth $9 million, according the fund’s Council of Ethics’ recommendation to divest from the two companies.

As for the Malaysian companies, at the end of 2013 the fund held a 0.49 percent stake in IJM worth $12 million and a 0.52 percent stake in Genting, according to the recommendations to exclude them. Genting’s market capitalization today is about $6.5 billion.

“The companies are excluded based on an assessment of the risk of severe environmental damage,” Norges Bank, the central bank which manages the fund, said in a statement.

“Before deciding to exclude a company, Norges Bank shall consider whether the use of other measures, including the exercise of ownership rights, may be better suited. The Executive Board concludes that it is not appropriate to use other measures in these cases.”

Daewoo International’s Merauke subsidiary is Bio Inti Agrindo (BIA). Its concession spans 32,500 hectares near Indonesia’s border with Papua New Guinea and overlaps with a WWF Global Ecoregion known for its rich assortment of plants and animals. There are 344 registered bird species and 69 species of mammal, including a variety of marsupials and birds of paradise, some of which are endangered and only found in this area. Yet its biodiversity remains poorly documented, with many species thought to be undiscovered.

At some point after BIA began clearing in 2012, the council noticed a discrepancy between the company’s environmental impact assessment, which portrays the concession as covered mostly in shrubs and bush with the rest consisting of secondary forest, and official maps and satellite imagery, which show that around half the concession holds untouched primary forest.

The council repeatedly reached out to Daewoo International to clarify the matter, but the information provided by the company “provides few answers,” according to the recommendation.

In the name of safeguarding protected species, BIA established three buffer zones along its waterways, but the council said it was “unclear … which species these actions are designed to protect, and how narrow strips of forest in a large plantation landscape will help to preserve ecological values in the concession area.”

In response to the council’s inquiries, Daewoo International replied that it planned to conduct a high conservation value (HCV) assessment, but according to the council the company specified no timetable for doing so and gave no indication that clearing would be suspended in the meantime.

“In the Council’s view, this measure is therefore inadequate to prevent severe environmental damage,” the statement says. BIA did not respond to an email seeking comment.

The recommendation also points to “an abnormally large number of fire hotspots” on the concession, enough to indicate that land is possibly being cleared by burning, which is illegal in Indonesia. Daewoo denied that burning was used to clear and attributed the fires to local peoples’ negligence, according to a correspondence cited in the recommendation. “This cannot be ruled out,” the recommendation says. “Nevertheless, the Council finds it unlikely that so many fires would occur in the concession area without any connection to the land clearing. In the Council’s view, the sheer number of fires and the fact that the burning has been ongoing for several years should have prompted the company to investigate the cause of the fires, and to consider whether its measures are adequate to prevent fires from occurring.”

Genting was excluded from the fund for clearing orangutan habitat and peatland in Borneo in violation of the Norway-Indonesia moratorium on logging certain types of forest. IJM was also said to be clearing important forest in Borneo.

Both of the Malaysian companies are members of the Roundtable on Sustainable Palm Oil (RSPO), a voluntary eco-certification scheme, but neither said they planned to obtain certification for their Indonesian units before 2018, “an unusually long timescale for building a more sustainable operation,” according to the council.

Noble Group Ltd., Asia’s largest commodities trader, was previously excluded from the fund over its oil palm plantations in the Indonesian provinces of Papua and West Papua.