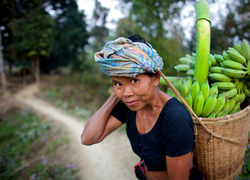 Indigenous people and local farmers in some of the world's poorest countries in recent years have seen companies push onto land they have inhabited for generations. (Photo: HKI/Ian Taylor)
Large food firms back voluntary plan to stop land grabbing

Drafted by senior figures from Nestle, Unilever, Coca-Cola and other large firms, along with researchers from Oxfam, Global Witness and the other international organizations, the voluntary guidelines on responsible land acquisition were released on Monday.

Indigenous people and local farmers in some of the world's poorest countries in recent years have seen companies push onto land they have inhabited for generations, as investors scramble to secure land rights and forest resources.

"Companies are taking greater responsibility to avoid forced evictions. They don't want to be expelling people from their land in order to produce goods," Jeffrey Hatcher, managing director of Indufor, a consultancy, and one of the authors of the new guide, told the Thomson Reuters Foundation.

Based on the U.N. Food and Agriculture Organization's guidelines, the framework is designed to make it easier for companies to comply with guidelines on buying land in areas where legal systems and formal documentation over who controls territory are often murky.

The guidelines don't just recognize formal ownership, they also back a form of squatters' rights, where communities that have been living and working in an area for a long-period have some claim to the land, said Hatcher.

The document also provided guidance on how to handle grievances from communities that feel they were unfairly impacted by land investments, Hatcher said.

Critics, however, say the initiative does not go far enough.

"Given the devastating impact of these large-scale land acquisitions, a set of 'voluntary' guidelines leaves communities vulnerable to the 'good will' of corporations at best," Anuradha Mittal, director of the Oakland Institute, a food rights think tank, told the Thomson Reuters Foundation in an email.

The companies have not formally endorsed the document, but activists hope participation by top corporate executives will create changes on the ground in some of the world's resource-rich, developing countries.

The company is "developing a new Global Land Rights Policy" which it will publish later this year, a Unilever spokesperson said in an email to the Thomson Reuters Foundation.

Neither Nestle nor Coca-Cola responded to requests for comment before deadline.

Corporations have faced "reputational risks" from activists campaigning against the land grabs, said Rodney Schmidt, deputy director of the Rights and Resources Initiative, one of the NGOs backing the new guidelines.

"But companies are also realizing they have a competitive edge if they address potential social conflicts around tenure issues upfront," Schmidt said.

"Indigenous people and local communities are becoming more aware that they have rights under national and international legislation."

More than 32 million hectares, an area larger than Poland, has been traded in large-scale land deals since 2000, according to a study from Sweden's Lund University published in November.

Schmidt has seen "a major increase in demand for large-scale land acquisitions" over the past decade, much of it coming from emerging markets.

That pressure has relaxed with the recent drop in oil and other commodity prices, he said, "but the long-term trend points towards competing claims for land-based resources".